Tourism — what are you going to do about it? C of C asks candidates 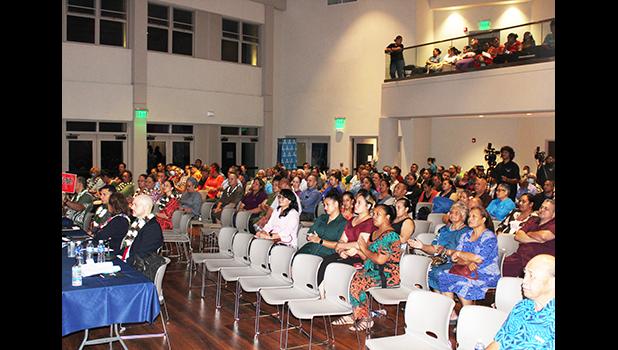 Pago Pago, AMERICAN SAMOA — Developing the local tourism industry has been targeted by past administrations as a third economic pillar for American Samoa, but the number of visitors to the territory remains low when compared to this booming industry in other Pacific nations.

And during a recent gubernatorial forum hosted by the American Samoa Chamber of Commerce, tourism industry development, was among the issues raised in one segment with three of the five gubernatorial teams.

The question was first directed to the Lemanu and Talauega team — in accordance with the rotation of questions posed to the candidates — with Talauega responding that the “tourism industry is important” and that “we have a beautiful island and we should do a better job in marketing it and growing it so that we have visitors.”

He said there are several things that need to happen, such as the “need to look at our immigration policies”. He recalled that during his tenure as Attorney General, he implemented several policies that allow visitors from select groups of countries to easily apply for permits to enter American Samoa.

Talauega didn’t elaborate further on such policies, but Samoa News notes that it was about two years ago that ASG implemented the American Samoa Entry Permit Waiver Program, covering 42 countries. And the program is overseen by the AG.

Speaking at the forum, Talauega said this program is ongoing but the COVID-19 pandemic has placed limitation on travel to the territory.

“COVID-19 has also taught us another thing. As we look around the Pacific, we see our neighbors suffer because their entire economy is based on the tourism industry,” he pointed out.  “Now we need to be smart, [on] how we develop tourism. We need to do a better job of implementing and using our American flag. We are the only American territory in the South Pacific. We should do a better job of inviting folks, [letting them know] when they land in American Samoa, they landed in America.”

“I think that there are things like that that we can do,” he said, adding that the obvious one, is work closely with the federal government to ease some of the regulations that limit the territory’s “ability to bring foreign carriers, transport our people to Hawaii and other places, and lower the cost of travel.”

(Talauega is referring to federal cabotage law — which prohibits foreign carriers from carrying passengers and cargo from American Samoa to and from any other US airport.)

“The one thing that I can promise [if elected], is that Lemanu and myself with work closely with the Chamber of Commerce, [and] the business community to look into these ideas. We’re not closed to anything in particular. We have put out our platform on how we intent to build and enforce tourism,” said Talauega.

Lemanu pointed out that “one of the biggest challenges to American Samoa is the federal cabotage law.” He noted that past administrations have sought to allow foreign carriers to land in American Samoa and travel to the US. And Lemanu and Talauega team will also continue this quest if elected to office.

For his team’s rebuttal, Tapumanaia said the Nua and Satele team understands the vital importance of tourism being that “we’re an isolated island and the only US territory south of the equator.”

“Our vision is to revitalize the tourism industry by putting focus on building our local product, which is cultural and historical. That means when come, “they want to see history, want to understand history,” Tapumanaia explained. “We want to support anyone who wants to start tourist-based business.”

“We want to assist locals who want to invest and build hotels, motels or rentals for tourists. We want to be able to collaborate with our congresswoman, be able to get waivers for cabotage to change our domestic destination as a US airport or to include American Samoa in the US essential air service,” he said.

Additionally, “we also want to reach out and promote American Samoa as a conference site for Pacific organizations. Tourism is important and because we are an island we can make it work, maximize the dollars that we can build for our economy.”

Responding for the I’aulualo and Tapaau team, I’aulualo said, “lets just be real. The tourism industry is really terrible right now. This is the kind of talk that we talked for the last 10 or 20 years.”

“But eco-tourism is here. We just need to promote it and market it right. That’s one factor,” he said, adding that another factor is the need to bring in more cruise ships especially ships which can spend 24-hours in the territory

“Ever since I came back from the mainland to American Samoa, I haven’t seen any cruise ship stay overnight. We need to do that. Let’s bring in over 2,000 tourists in 24-hours or 48 hours,” I’aulualo said.

“If they can stay overnight, that’s a big infusion in our economy. But the government’s responsibility is to build the infrastructure that makes people stay here overnight. That’s our responsibility and it’s what Tapaau and I’aulualo are going to do,” he said.

Samoa News will report in later editions on other forum issues.