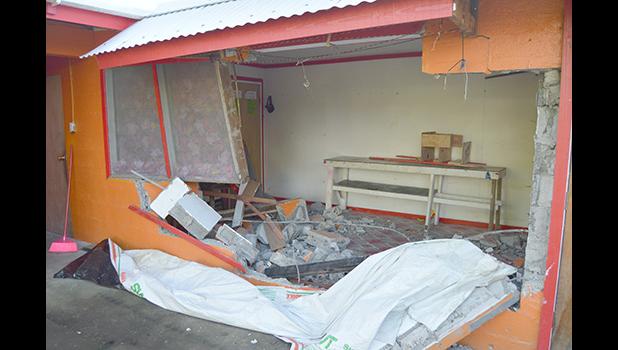 Pago Pago, AMERICAN SAMOA — The driver of a vehicle that ran off the road and crashed into a house in Nu’uuli, killing a 2-year-old girl and injuring two others was later arrested after she fled the scene and she’s now facing several charges.

The driver, Xiujn Chen, who is the defendant is this case, is charged with one felony and several misdemeanors.

The government alleges that it was about 10:21a.m on Apr. 14, 2021 when the Fagatogo Police Central received a stressful phone call from a man requesting police assistance after a vehicle ran into a family home in Nu’uuli with possible injured occupants involved.

The reporter further stated to police that there was an Asian female who quickly walked away from the crash and is believed to be the driver of the vehicle. After contacting police for assistance, the reporter turned around and started helping people who were injuries as a result of the crash.

Several police units with many police officers rushed to the scene along with EMS.

Nine minutes later, the first police unit from the Tafuna Police Substation (TPS) arrived at the scene of the accident and observed several people with injuries at the scene. These people were occupants of the house, into which the vehicle crashed. The victims were later identified as a 30-year-old mother and her two young daughters — a 2-year-old and a 11-month-old.

Officers quickly offered assistance to help the victims.They observed the 2-year-old girl right underneath the vehicle’s front tire, facing downward on the bed. The young girl was presumed dead after an initial observation by the officers, and given the condition of the accident scene.

Responding officers along with the help of bystanders were able to lift up the front of the vehicle and remove the body of the 2-year-old girl. EMS personnel arrived at the scene shortly and confirmed that the 2-year-old girl was unresponsive and her body was later transported to the LBJ Medical Hospital while other EMS crew continued to assist officers with the other injured occupants at the house.

Two more police units with several police officers arrived at the scene and offered assistance while investigators started to collect information of the incident by interviewing several eyewitnesses who were also at the scene offering their assistance.

One eyewitness told investigators that immediately after the crash, she saw an Asian female hop out of the vehicle’s driver-side and quickly got a child out of the back seat and immediately left the scene of the accident in a rush. She appeared to be running and limping off heading toward the main road.

Another eyewitness told investigators that she was shocked when she saw the vehicle run into the house. She described what she saw as something that should never happen because there were other vehicles parked in front of the house, however, the vehicle ran straight into the house.

A third eyewitness who was near the crash scene told investigators that she was selling fish with her husband parallel to the dirt road (next to KT Mart in Nu’uuli) where she observed the vehicle earlier, traveling at a high rate of speed, going down the sloped dirt road, and seconds later a male individual ran up to her and her husband requesting a phone to call EMS unit for assistance, as a vehicle had run into a home and over a child.

The woman and her husband immediately offered their help by calling police for assistance and at the same time rushed down to the scene where the incident happened to offer help.

After collecting information from several eyewitnesses about the identify of female individual who was last seen at the scene, investigators searched the area looking for the main suspect in this matter. The suspect was later located hiding inside a restaurant, located not far away from the crash scene. She was immediately apprehended and later transported to the TPS for questioning.

The suspected was later identified as Xiujn Chen, the defendant in this matter.

She was Mirandized and informed investigators that she understood her rights and wished to make a statement concerning what happened.

She stated to investigators that she when to sleep 8p.m the night before and woke up at 12am and couldn’t go back to sleep. So when she went to work in the morning, she she was feeling very tired. She stated that her job requires a lot of driving around and she ended up behind the wheel and unexpectedly fell asleep.

She was driving her boss’s vehicle, and didn’t realize she had fallen asleep when the vehicle ran off the dirt road and crashed into the home. She claimed that she mistakenly pressed the accelerator pedal instead of the brake pedal then fled the scene, because she was scared that someone might hurt her.

She further stated that she thought that she should stay behind and offer assistance if there was anyone injured however, out of fear, she decided to run for her life. She then opened the back seat, grabbed her boss’ child and immediately disappeared.

Investigators went back to the LBJ hospital around 3:20p.m to check up on the victim, and discovered that the 2-year-old hooked up to a ventilator and a heart monitor. Unfortunately, despite all attempts the the victim did not survive.

According to family members, the little girl is scheduled to be laid to rest this morning at her home in Pavaiai.

Chen, 38, made her initial appearance in District Court last week.

Bail is set at $20,000 and a preliminary hearing is scheduled for next week.