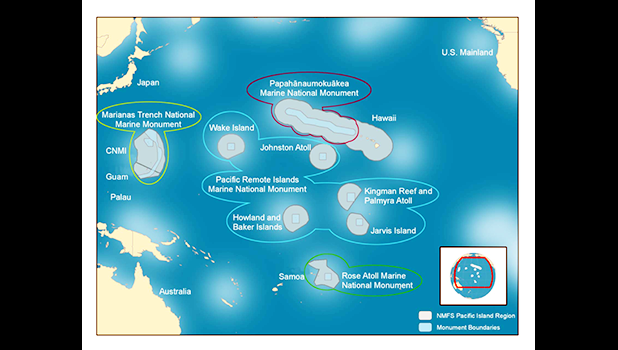 However, there has been strong opposition from conservationists and environmentalist groups as well as others living in the US to any changes to the PIRMNM, which was first established in January 2009 by then President George Bush. With the marine monument designation, commercial fishing is prohibited within boundaries of the monument.

In September 2014, former President Barack Obama expanded the PIRMNM boundaries — to the seaward limit of the US Exclusive Economic Zone (generally 200 nautical miles) off Jarvis and Wake Islands and Johnston Atoll. As reported by Samoa News at the time, Tri Marine, which has a US purse seiner fleet based in American Samoa, along with other fishing fleet owners and local leaders strongly opposed the expansion, arguing that these are traditional fishing grounds for the US fleet.

Earlier this year in May, US President Donald Trump issued an executive order, calling for the review of all land and marine monuments going back to 1996. Thereafter the US Interior Department started accepting public comments, which closed at the end of business, Monday, July 10.

As of 7a.m. Monday morning more than 1.3 million comments were publicly released on federal portal <www.regulations.gov>

Among the comments submitted is a July 3rd letter from Tri Marine chief operations officer, Joe Hamby, with Tri Marine’s recommendation for the US Secretary of Commerce to begin a rule making to overturn the ban on commercial fishing in those waters which were added by Obama to the PRIMNM. (US Commerce Department has jurisdiction over federal fishery issues)

Approximately, those would be waters seaward of 50 nautical miles of the mean low water mark around Wake, Baker, Howland, and Jarvis Islands, Johnston Atoll, Kingman Reef, and Palmyra Atoll, the letter says.

“This would allow protection of the sensitive near shore coral reef habitat, while allowing fishing for highly migratory species like tuna further offshore that are subject to management by WCPFC (Western and Central Pacific Fisheries Commission) conservation measures,” said Hamby in his three-page letter.

Tri Marine “has been deeply concerned about the expanding use of a land-oriented statute to address issues of resource conservation in wide expanses of the ocean even where international and national governmental bodies address in detail the proper conservation and management of tunas,” he said, adding that Tri Marine has “significant operations in to and out of American Samoa as a foundational element of the only private economic activity of significant consequence in that Territory.”

Hamby argued that the designation of PRIMNM and its later expansion “have no discernible science-based conservation and management benefits to the highly migratory tuna resources of the region, yet the closure of these areas has created a negative economic impact on our fishing and processing operations, as well as the viability of the American Samoan economy.”

He outlined the company’s rationale for its request for a rule making process, and this is consistent with objections to the ban on commercial fishing in the Monument and its Expansion, that have been made from the beginning.

For example, he said, prohibition on commercial fishing for highly migratory species in the Monument is not based on science. “Tunas are highly migratory and move thousands of miles throughout their range,” he explained. “Unlike other species that can be managed on smaller spatial scales, they are not ‘resident’ in any narrow ocean area, such as reef fish.”

He argued that tuna fishing in the region is sustainable and prohibition on commercial fishing in the Monument was a top-down directive without an environmental assessment or fishery management justification.

“No case has been made that a ban on commercial tuna fishing in the Monument will have an impact on the current and future sustainability of the resource,” he said.

“No evidence has been presented that highly regulated past tuna fishing activities in the areas now designated as a Monument have led to any decline in stocks, or caused any negative impact at all.”

Tri Marine requests that a process begin to remove the restrictions on commercial fishing for tuna in the Monument outside 50 nautical miles from shore and to affirm that tuna shall be managed either pursuant to the Magnuson-Stevens Act bottom-up process or through conservation and management measures adopted by the Commission and implemented by the United States.

Tri Marine last December shut down its Samoa Tuna Processors cannery operations in American Samoa, saying it was temporary.  And, late last month, Tri Marine said in a statement that the company was continuing to explore options for the cannery, including an arrangement with another operator to reopen the facility.

Meanwhile, the US Commerce Department on June 26th issued a notice that it was seeking public comments pursuant to the President’s executive order, “Implementing an America-First Offshore Energy Strategy,” signed on April 28th.

Among the eleven identified in the notice is the National Marine Sanctuary of American Samoa and the PRIMNM.

Details of the notice can be found online at www.regulations.gov and comments may be submitted no later than July 26, 2017.