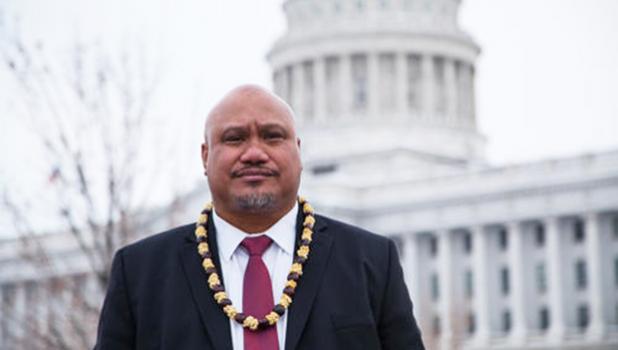 By
compiled by Samoa News staff

Pago Pago, AMERICAN SAMOA —  As President Donald Trump pushes to end birthright citizenship for U.S.-born children of immigrants who are not citizens, a federal court case filed in Utah that seeks to expand that exact right for American Samoans is heating up, according to KUER.org — public radio news from Utah.

It says: Located in the South Pacific, American Samoa is a U.S. territory but American Samoans are not automatically U.S. citizens. Instead, they are labeled as U.S. nationals, which means they don’t enjoy the same privileges as U.S. citizens, including the right to vote. They also miss out on job opportunities that are only available to U.S. citizens.

A group of American Samoans living in Utah want to change that; John Fitisemanu, Pale and Rosavita Tuli and the Southern Utah Pacific Islander Coalition sued the U.S. government back in March for that change.

The federal government’s historic stance on citizenship for American Samoans is not too different from Trump’s idea, said Neil Weare, the plaintiffs’ lawyer.

“I cannot understand how I can be a passport-holding American, but not be recognized as a U.S. citizen,” John Fitisemanu said in a statement. “This isn’t just unfair, it’s unconstitutional.”

The 14th Amendment states that all people that are born in the United States and under the country’s jurisdiction are citizens. The plaintiffs argue that as a territory, American Samoa is under U.S. jurisdiction, so they should therefore be U.S. citizens.

“What President Trump is proposing to do has already happened before and has resulted in the denial of citizenship to a group of Americans, people born in U.S. soil for more than 100 years raises some troubling concerns today,” said Weare, who is also the president and cofounder of the nonprofit Equally American.

Oral arguments in the American Samoans’ case will be heard November 14 in U.S. District Court in Salt Lake City.

In the meantime, American Samoa’s Congresswoman Aumua Amata clarified that U.S. National status will not change despite national news reports of current political debates or proposals in the United States, according to a press release from her office in Pago Pago, on Wednesday, October 31, 2018.

“US Nationals are Americans,” said Aumua Amata. “Our people have a fully secure status that is completely unaffected by this current debate and proposal in the U.S. That discussion doesn’t apply to American Samoa. Instead, that is an immigration matter, and since American Samoa is already a U.S. Territory, our people are not immigrants — they are Americans. It is important that there is no confusion about that.”

Congresswoman Amata is responding to questions raised by news reports about the possibility of changing birthright citizenship. She is clarifying clearly that the proposal will not affect the status of American Samoan nationals. American Samoan nationals have a status that was enacted by Congress into a federal law. It cannot be changed by executive order, and in fact, the President did not propose any change at all for US Nationals or American Samoa.

“It has been settled law for decades that the 14th Amendment does not extend birthright citizenship to individuals born within territories of the United States like American Samoa,” continued Congresswoman Amata. “I want to be clear that the President’s remarks simply do not apply to the status of American Samoa’s U.S. Nationals.”

The people of American Samoa have sent the message through their elected officials in the United States Congress and in the American Samoa Government that they do not want the courts or the Federal government to change their status, but to continue allowing citizenship as a choice.

“Our priority has been ensuring that the federal government respects the historic right of the people of American Samoa to self-determination, which allows our people to preserve our distinctive culture, and prevents unfair discrimination against American Samoa’s U.S. Nationals,” concluded Amata.

“I recently introduced my bill, HR 5026, which would streamline the process for Nationals who freely wish to transition to Citizenship by removing unnecessary hurdles like wait times and the civics test, along with the possibility of waiving fees and lower costs.

“My bill was drafted with input and support from the Trump Administration, including both the U.S. Department of Homeland Security and the U.S. Army, and it is a balanced approach that preserves our people’s full rights as U.S. Nationals.”