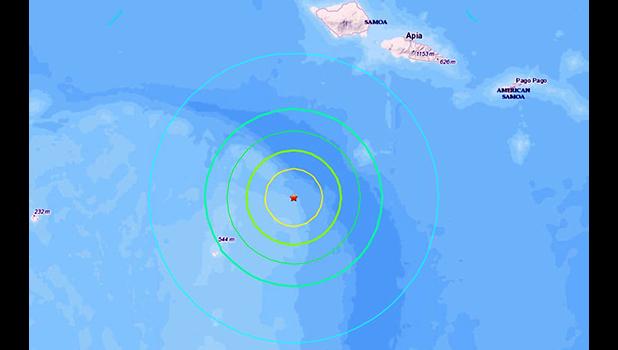 The US Geological Survey reports the shake happened south-east of the Samoas at a depth of 36km about 8.30am Monday in Samoa and 7:30am Sunday in American Samoa.

The USGS put the center of the quake at 108km north of Hihifo, Tonga, and south of Apia.

It was rated green on the PAGER response system, meaning there is low likelihood of casualties and damage.

An RNZ Pacific correspondent in Apia, Autagavaia Tipi Autagavaia, said there was some panic when the quake struck.

He said his neighbor ran over asking him to take him and his family inland to higher ground.

There are seven siren spots in the capital Apia and people were confused about whether they should wait for them to sound or just move to higher ground, he said.

Autagavaia said the earthquake was so strong it reminded him of the 2009 quake.

That 8.3-magnitude quake generated a devastating tsunami that struck the Samoas and Tonga, and killed 186 people died.