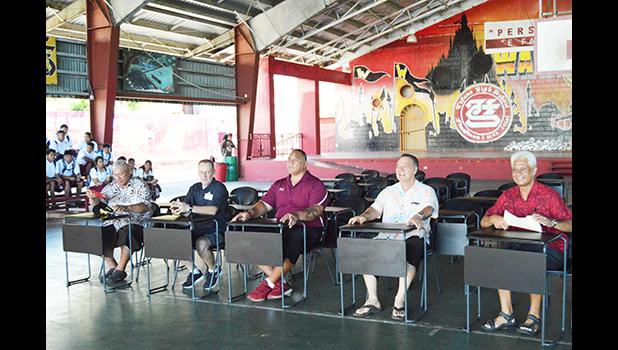 Pago Pago, AMERICAN SAMOA — A donation by Haleck Enterprises Inc. and Cost U Less of 200 sets of school desks and chairs was made to the American Samoa Department of Education this week, and accepted by various schools throughout the Tualauta area.

A total of 60 sets were donated to Tafuna High School (THS); 60 to Pavaiai Elementary; 40 to Lupelele Elementary and another 40 to Pacific Horizons School.

Avamua Dave Haleck of Haleck Enterprises Inc, and Marvin Raps, Manager of Cost U Less were at THS yesterday morning to present the donation and officials of THS along with Tualauta Representative Larry Sanitoa received it.

Avamua told the THS students that over past years, he has heard on the media that there is always a need for desks and chairs for our students. So late last year he prepared a container from Asia with chairs and desks for students of American Samoa.

“The opportunity was there so I sorted out the supplier and ordered 200 tables and chairs with a value of about $20,000,” Avamua said.

He said he reached out to his supplier, Marvin Raps, the General Manager for Cost U Less and asked him to locate a manufacturer of school desks and chairs to produce an order to fill the container.

“I reached out to Mr. Raps and asked him if he could support us with this donation and he happily said yes, he will support you for  these desks and chairs for students of American Samoa,” Avamua said.

He said that education plays an important role in the development of students in order for them to prepare for their future.

“We are pleased to provide this donation in hopes that it will contribute to this development. We wish you the most success. Please, stay away from drugs and alcohol,” Avamua concluded.

Sanitoa on behalf of the Tualauta District and the Government of American Samoa thanked Avamua and Raps for helping the schools in the territory. “We’re very fortunate that you had stepped up and offered your great support for these young people, who are the future of this territory,” Sanitoa said.

He further stated that he hopes other businesses in the private sector can step up and help out our schools.