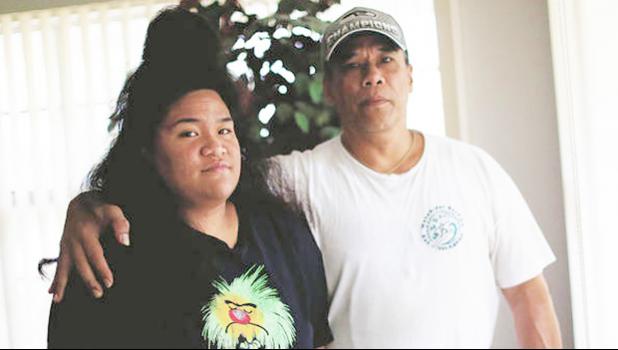 Honolulu, HAWAII — lalio Polevia and his daughter Rita were set to go home to American Samoa in March, but their flight was canceled amid the COVID-19 pandemic and they’ve been stranded in Hawaii ever since.

Polevia, 48, was worried that he and his 16-year-old daughter may be homeless in an unfamiliar place with no family as a safety net. He tried two times to book a flight through Hawaiian Airlines, only for the flights to be canceled.

American Samoa is under a public health emergency and state of emergency order implemented by Gov. Lolo Moliga. All flights to the country from both Hawaii and (Western) Samoa remain suspended. What’s allowed within the territory’s border is a cargo flight with medical supplies and food it receives once a week from Hawaii.

All Hawaiian Airlines flights will be suspended for an additional 30 days, with reconsideration slated for Aug.1.

About two days after Polevia and his daughter landed in Honolulu, they were introduced to Jessica Lani Rich, president and CEO of Visitor Aloha Society of Hawaii.

The Visitor Aloha Society has assisted travelers with flights back home during the pandemic, but the Polevia family’s situation is unique.

Rich has been working on getting an exemption from the governor of American Samoa so the Polevias can go home. The need became greater when two family members died last week.

“It’s very hard to think about it because the thing is we can’t go,” Polevia said, noting that his daughter was heartbroken that her grandfather died. “It’s really hard for us because in our culture we gotta be there to attend the funeral, but there’s nothing me and my daughter can do. We’re stuck here in Hawaii.”

Despite their predicament, the Polevias remain optimistic with one message to their family: “We send our love and hope God will provide an answer for us. If we get to go back home, we’ll see you guys over there, and we’re OK.”