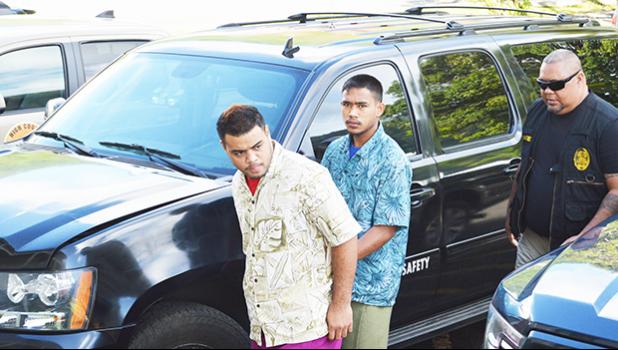 Pago Pago, AMERICAN SAMOA — Two young men were arrested by DPS detectives last week and have been charged with second-degree murder in connection with the killing of a man, who was beaten to death with his body left on the side of the road in Taputimu last month.

Tonia and Malo are held in custody without bail.

During their initial appearances, defense attorney Stuart asked the court to set bail for both of his clients.

Despite the seriousness of the crime with which both defendants have been charged, the defense attorney told the court his two clients are very young and have strong ties to the community.

They are not flight risks and the case against them is just an allegation, he said.

The prosecutor strongly opposed the defense’s motion and asked the court to hold both defendants in custody at the Territorial Correctional Facility (TCF) without bail. According to the government’s attorney, both defendants have been charged with a very serious offense and the government is concerned with their safety.

In discussing the safety of both defendants, the defense attorney requested that the court allow both of his clients to be housed at the Temporary Holding Cell (THC), at the Central Police Station in Fagatogo.

The government’s attorney echoed the defense’s request, and it was granted by the court.

The case against the two young defendants came to light when the Tafuna Police Station received a call from a witness last month that a body was laying on the side of the road in Taputimu.

Several police officers including armed Detectives of the DPS Vice & Narcotics Unit responded to the scene and immediately started their investigation.

While investigators were working to gather information and evidence, a man called them and offered them a piece of information, which helped with the case.

According to the man who called investigators, it was around 5:40 p.m on the previous day when he saw the victim standing at the side of the road talking to two young men in the same area where his body was later found.

The witness gave investigators the description of the two young men that he saw talking with the victim before he was found dead on the next day.

Investigators were able to identify the two men who spoke to the victim before he was found dead, and brought them to the Police station for questioning. According to the police report, both suspects waived their rights and willingly gave investigators their sides of the story.

According to the suspects’ statements to police, they were on their way home after a afternoon exercise when they came across the victim standing on the side of the road alone. The victim called out to the two suspects and asked them if they had a lighter so that he could smoke his ‘stuff’.

Both suspects responded politely to the victim, saying that they only had a box of matches but they don’t have a lighter. The two suspects then continued on to their destination, however, the victim ran towards them and told them to stop.

While both suspects were standing there, the victim walked over to Malo and allegedly reached inside his pocket and pulled out $5. According to the government, Malo got mad and asked the victim to give back his money. Instead of returning the money to Malo, the victim allegedly punched Malo in the mouth. Malo responded by throwing a punch to the victim’s face and then grabbed his $5 back.

The victim responded by throwing a second punch to Malo’s face, followed by another punch. That was when Tonia jumped in and threw his punches at the victim; and both Malo and Tonia allegedly assaulted the victim by throwing punches to his facial area, causing the victim to fall down on the ground.

Out of anger, both suspects continued to assault the victim by punching him and kicking him in the facial area and his back.

Both Malo and Tonia left the scene after they allegedly assaulted the victim, and left his body laying in the area where they assaulted him.

When investigators informed Malo and Tonia that the victim was now deceased, both suspects broke down into tears and told investigators that they had no intention of killing the victim. They were just responding to his violent actions against them.