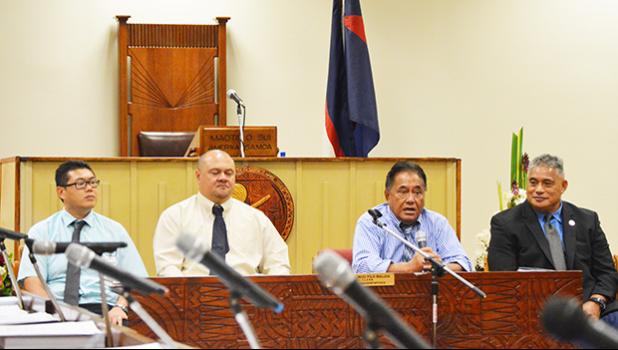 Pago Pago, AMERICAN SAMOA — American Samoa is planning two flights each month through December as the territory moves to reopen commercial air service between Honolulu an Pago Pago, with the hope of more flights — all depending on the increase in the local COVID-19 vaccination rate and the rise in cases in the US, attributed to the new delta variant.

Acting Gov. Talauega Eleasalo V. Ale revealed the planned Hawaiian Airlines flight dates during a news media question and answer session at his office last week Thursday — three days after the Aug. 30th test flight from Honolulu that tested not only the local preparations but also the new TalofaPass Web-system.

While the test flight was a success, some travelers as well as passengers set for future flights are complaining of facing issues  and problems — “hick-ups” — with TalofaPass system, which screens travelers entering the territory.

Talauega acknowledged issues with the system saying, “Like any new complex piece of software, there’s going to be ‘hick-ups’ along the way. And we’re asking the community to be patient and work with us. Hopefully by October, the whole system will be in place and the ‘kinks’ will be worked out.”

He pointed out that this was exactly the reason for the test flight “to put the TalofaPass on a ‘live’ situation, to see how it works and what needs to be changed, and fix it. So we’ve received a lot of those types of comments and criticism. But this is what we’re hoping this [test] flight would be.”

The COVID-19 Task force had previously announced that the commercial flights set between Honolulu and Pago Pago for this month are Sept. 13th and Sept. 27th.

And Talauega hopes that come Sept. 13th, “we should be able to have everything worked out so that people receive their approval” and travelers on the Sept. 27th flight “are now on this system and registered.”

ASG distributed an Aug. 31st notice on social media that includes information, saying the Sept. 13th flight is exempted from the 21-day registration on the web-system. And the notice urged travelers  on the flight to register as soon as possible before the Sept. 3rd and Sept. 10th required COVID-19 tests in Honolulu prior to departure.

Galoia — the IT manager at the Governor’s Office — posted to the Tagata Tutu Fa’atasi Alliance of American Samoa Facebook page his contact information for questions on TalofaPass to please email (faamasino.galoia@go.as.gov) or call (684-633-4121 ext 1121). Email is preferred.

During the news conference, Talauega said that “one of the benefits of this system is, that once you sign up and upload the passport and key information, the next time you travel — you don’t need to upload those [again], because it will remembered in your file.”

The only thing left, when traveling again, is uploading to the system the information on the COVID-19 shots and required tests — which need “to be re-done every time you travel,” he explained.

Asked about future flights after September, Talauega told reporters that the “planned schedule of flights is every two weeks from now on out, subject to change.” The flights will operate on Mondays — Oct. 11th and 25th; Nov. 8th and 22nd, and Dec. 6th and 20th.

He also said that Hawaiian Airlines has been apprised of these dates and soon they will be available on the airline’s computer reservation system.

“That’s the plan for now, but we are interested in getting things back to normal,” he said, and explained that if come November or December, “we have a better feel of our vaccination [rate] here and the condition of the virus in the US, the governor and I would like to see weekly” flights.

“If we could do that here, that would be a plus for us,” he said but also notes that weekly flights all depend on the capacity to quarantine travelers on island because currently there’s limited space for quarantine facilities.

He further explained that it’s the recommendation from doctors that the quarantine period, upon arrival on island, is 10 to 12 days. And with that quarantine period, “we can’t do weekly flights, because we now have two good facilities and they’ll all be booked for the flights,” he said referring to the two facilities – Sadie’s by the Sea hotel and Tradewinds Hotel.

The other option, that physicians have thought about, is maybe “reducing the number of passengers coming in,” so that there is one group staying at Sadie’s and the other at Tradewinds “and we can continue the weekly trips.”

“So those are all the things discussed during the task force meeting,” he said, and reiterated that the “goal of the American Samoa Government has not changed, since last year” and that is to ensure the safety and heath of the territory with “zero” cases locally.

“So we have to be strong with our Talofa Pass. I know folks would like to go home as soon as they arrive but for the time being that’s just not possible. Once we get to a position where there is confidence in the health community and with what’s happening off island and our vaccination [rate] is up, then that will be a great thing,” he said.

He emphasized to reporters that the current planned schedule for resumption of commercial service twice a month up to December — is subject to change.