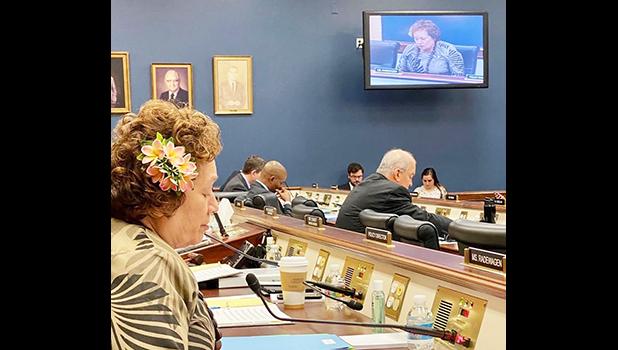 Washington, D.C. —  Congresswoman Uifa’atali Amata is welcoming bipartisan House passage Wednesday by a vote of 420-4 of legislation she cosponsored to establish a new committee of Veterans from the islands to advise the U.S. Department of Veterans’ Affairs (VA) and the VA Secretary on Veterans’ issues affecting them. These advising Veterans would be from the five U.S. Territories and the three Freely Associated States to provide direct input about VA services to the insular areas.

“The VA will be able to serve island Veterans better with the help of their direct advice and input, and this will improve communication and services for our Veterans,” said Congresswoman Amata. “These Veterans on the Advisory Committee will provide their insight while they personally experience how the VA provides services to the islands. We have a lifelong commitment to our Veterans, and I’m so pleased to see the House pass the bill, and to be an original cosponsor.”

“I appreciate how all the representatives from the territories worked together to strengthen our Veterans’ communities throughout our various islands,” continued Amata. “Thank you again to my friend, Congressman Sablan, for his leadership of this bipartisan legislation.”

This advisory committee will advise the VA Secretary on the availability and accessibility of services and benefits within the insular areas, and take part in discussions regarding how to improve that distribution of services and resources in these areas.

Uifa’atali Amata voted in the Natural Resources Committee for the American Fisheries Advisory Committee Act of 2021, H.R. 3128, which was passed and will be sent to the full House of Representatives. The Congresswoman was the sole original cosponsor upon the bill’s introduction in June by Dean of the House Congressman Don Young (R-Alaska).

The legislation would add options for research and development grants related to fisheries, and would produce more balanced representation for the region on the American Fisheries Advisory Committee, leading to better input from the Pacific region.

“Fishing is part of our way of life, and the backbone of our local economy,” Congresswoman Amata said. “The Pacific Ocean is inseparable from our daily lives in every village of American Samoa. The American Fisheries Advisory Committee Act plays a part in the efforts to ensure the health of this ocean that we love, and preserve and protect fishing for generations to come.”

During Wednesday’s markup, the Committee voted on a series of bills, in a week that has included a focus on fishing-related legislation in the Committee.

The Magnuson–Stevens Fishery Conservation and Management Act governs marine fisheries in U.S. waters. Over the years, the Act has been amended and extended, but it requires proper reauthorization, and Congresswoman Amata supports Congressman Young’s effort to fully reauthorize and update the longstanding law.

On Tuesday, Amata took part in a legislative hearing of the Subcommittee on Water, Oceans and Wildlife (WOW) that examined several bills, including Congressman Young’s reauthorization legislation.

“The Magnuson-Stevens Act is overdue for a full reauthorization, and I appreciate Congressman Young’s balanced and responsible focus on this important effort,” Amata concluded.