US Post Office in Fagatogo reopens after closing for one day 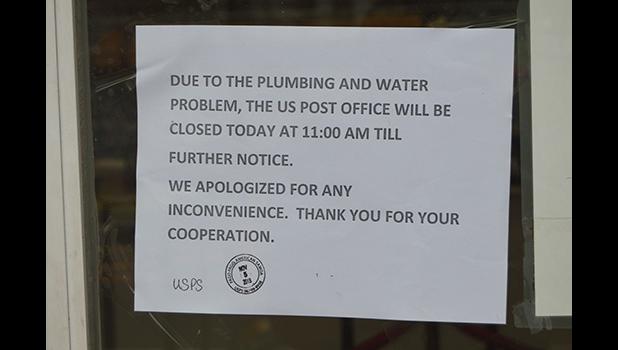 Pago Pago, AMERICAN SAMOA — Although the US Post Office in Fagatogo reopened yesterday during normal business hours, this notice was still posted around 1p.m yesterday on the main door of the Post Office, saying that the Post Office was closed until further notice, “due to plumbing and water problem” at the Lumanai Building which houses the Post Office.

The USPS Communication Office in Honolulu had issued a brief statement on Monday about the local Post Office closure for business on Monday, Nov. 5 due to issues affecting the Lumana’i Building and “will reopen as soon as the facility issues are resolved”.

Matagi-Fa’atili immediately contactED the American Samoa Power Authority, which operates the sewer lines and also have the necessary equipment for assistance and the ASPA crew responded right away. The DBAS president was also onsite to check on the problem as well as ensuring a complete clean up once the problem was resolved.

“I’m very thankful to ASPA crew for their immediate response,” she said in a brief phone interview, adding that everything was resolved by 2:30- 3p.m on Monday.

Matagi-Fa’atili was also in close communication with an off island Postal Service Union representative, who also contacted the DBAS president regarding the safety of Union’s employees in Pago Pago.

“My sincere apologies to the Post Office and our tenants as well as the general public for the inconvenience caused by this problem. On behalf of DBAS, I thank you for your patience,” Matagi-Fa’atili said.