Veterinary clinic is out of meds, out of vaccines, virtually out of business 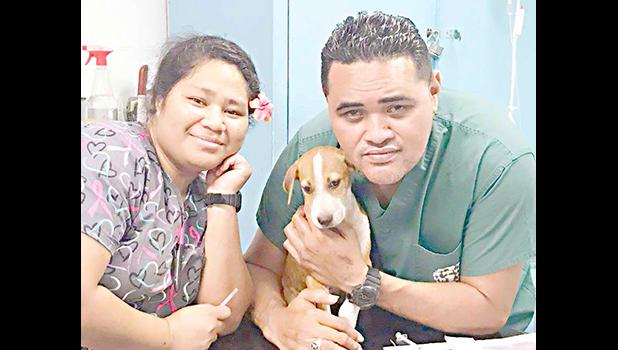 Pago Pago, AMERICAN SAMOA — Faced with the lack of medication, the Veterinary Clinic at the Agriculture Department compound in Tafuna has turned away, as of last week Friday, more than 100 people, who sought — among other things — vaccinations and surgeries for pets, according to one of the four reports by a staffer at the clinic and passed on to several lawmakers.

Samoa News received information from several local residents who observed notices posted last week on the clinic’s door, saying “Sorry no medication, we have no vaccinations. Please refer all complaints to the main office.”

Residents, who stopped at the clinic to get medication for their pets are now asking, where do they go from here? And they have raised concerns with their lawmakers.

One of the reports — “Our Current Situation at the Veterinary Clinic” — received by lawmakers, claimed that between Aug. 19th and Sept. 25, “we have had to turn away 194 people for vaccinations, flea & tick treatment, antibiotics, medication and surgeries.”

“Due to the lack of medication at the clinic, we have also seen many animals that have come in sick and all we could do is the health examination, advise them what was wrong with their animal, and send them home without medication to save their pets,” the report states.

It explained that, of the 194 people on clinic’s list, 96 of them came in for vaccinations in fear of leptospirosis. And people are wanting to vaccinate their litter of puppies or all their adult dogs needing their annual vaccines.

“The 96 people would need 223 vaccines for all animals that were turned away,” the report said. “Not mentioning that puppies and kittens get 4 to 5 shots in 3-week intervals, meaning most of the young animals in the past month are already behind on two vaccinations.”

This young girl loves her kitten and hopes soon the Veterinary Clinic will have the shots and medications needed to keep her pet healthy. [SN photo]

“We knew that if medication was not ordered soon, we would have to deny services,” the report says noting that a letter was sent to the governor on Sept. 15th that the clinic was down to a few more days of medication but was given no response “and we were about to hit rock bottom.”

The report claimed that a response was finally receive from the governor, through his secretary “to order the medication but at this point all U.S. Veterinarian’s refused to do so because ordering medication would only be a temporary fix for the Veterinary Clinic and not a long term solution.”

“They felt that hiring a U.S. certified veterinarian was being avoided when there has been a Veterinarian waiting since February of this year to be hired under the [ASG] Department of Health, but it was put off,” the report says.

It also explained that there are not very many U.S. Certified Veterinarians in the United States today and due to that fact, they all know one another.

“They come together under non-profit organizations to help solve problems around the world,” it says.

The report points out that ASG hired two U.S. Certified Veterinarians under the Department of Agriculture between 2013 to January 2019.  And they are Dr Brenda Smith and Dr Kristen Jensen.

The report claims that the contract for the two veterinarian doctors “were both misled and not fulfilled.”

“The lack of coordination, cooperation, organization, financial support and no support whatsoever for the Veterinary Clinic was the reason,” the two veterinarian returned to the U.S., the report claims.

“They both departed our beautiful island... disappointed and let down.  Their hearts are still here and they would love to return with non-profit organizations to help the animals but have no plan on returning to work under the Department of Agriculture,” it says.