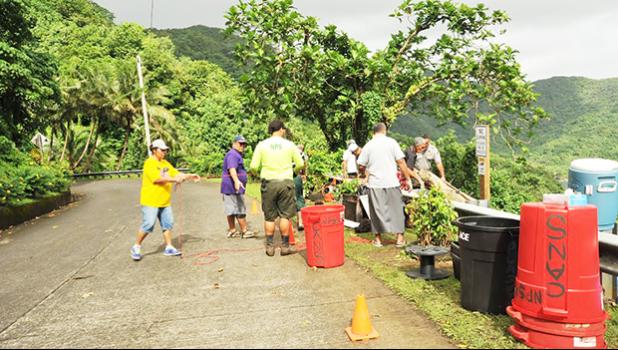 Villages helping Villages is the motto of the American Samoa Illegal Dumping Task Force, a group established last year to combat the problem of illegal dumping. The Office of Samoan Affairs, the National Park of American Samoa, other local agencies and many villages make up this group.

With the support of villages they identify and clean up illegal dump sites, install “No Dumping” signs and surveillance cameras at problem sites and work together to spread the word about a problem plaguing our islands. The National Park follows up each cleanup with a school program in that same village. This task force started out with five villages and continues to grow with every cleanup.

Last week the Task Force focused on a problem site in Fagasa. The slopes along the road to Fagasa have long been a site where households, contractors and others dump everything from construction debris, auto parts, and kitchen trash. Yes, everything including the kitchen sink. All this garbage is very harmful to our environment and can threaten human health. People that are illegally dumping might think that if their garbage is out of site, it will disappear forever. But that is not the case. The increase in illegal dumping seems to be growing worse by the day, and villages are working together to put a stop to it.

The members of the Task Force stand together to defeat those that might ruin the land and water for us all. It is truly villages helping villages. Ecclesiastes 4:12 "And if a [man] overpower the one, the two shall withstand him; and a threefold cord is not quickly broken."

Last Friday during the cleanup in Fagasa, National Park crews used safety ropes to access the steep hazardous slopes containing the trash. “Since we first got this group together, I have been continuously inspired by the passion and the persistence of the members of the Task Force,” said Scott Burch, National Park Superintendent and co-chair of the Task Force. “They are determined to stop people from dumping trash on their lands, and the worse the problem gets, the harder they work.”

More and more surveillance cameras are being installed by villages with the hope to stop the few that are ruining our islands for us all.

“I want to thank the Illegal Dumping Task force, the National Park and the Office of Samoan Affairs for working together to try and tackle the problem of illegal dumping.” said Atuatasi Talosaga from Fagasa. “I really would like to let my village know and be aware of mosquito borne diseases that stem from these roadside dumps. Not only that, but all of this contamination from the trash will go into our streams and our coral reefs, and this can greatly affect our children in the village.” The village of Fagasa plans to put up more cameras and get tough on enforcement to put an end to the dumping problem in their village. That enforcement includes a village fine of $500 for littering.

With villages helping villages, the Illegal Dumping Task Force of American Samoa hopes to solve this problem one step at a time. There’s a simple solution to this problem: Fa’amolemole, use a dumpster.