Visiting the ‘island of seabirds', the wildlife refuge in American Samoa 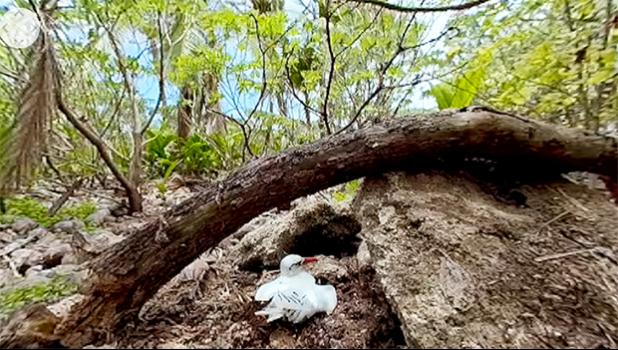 Source: PBS
To see how one of the most remote places on earth is being impacted by climate change, NewsHour Weekend traveled last fall to Rose Atoll, an uninhabited wildlife refuge in American Samoa. We had to get a special permit from the U.S. Fish and Wildlife Service and then chartered a boat for an eight-hour ocean voyage.

Rose Atoll, AMERICAN SAMOA — The southernmost point of the United States is not in Florida or Hawaii… or even in the northern hemisphere. It’s here, the smallest in this chain of American Samoa islands.

To get there, we chartered a boat from Pago Pago in American Samoa, 180 miles — about an 8-hour boat ride — to this tiny speck of a place.

This is a 360 video, which means you can look in all directions. To view the video go to the bottom of this page

I’m holding the camera behind you.

Those are producers Laura Fong and Mori Rothman.

Out there, ahead of us, is Rose Atoll, designated since 2009 as a protected marine national monument.

We got a special permit in the fall to film here with the U.S. Fish and Wildlife Service.

Our host Brian Peck of the Fish and Wildlife Service, is Rose Island’s official caretaker. In that role, he’s come to know the island better than anyone — one of the most frequent human visitors to one of the least visited places on the planet.

Rose Atoll, all of 16 acres, is uninhabited and has absolutely no infrastructure.

So we had to bring everything with us that we’d need for a four-day stay, including tents and food and equipment.