Visiting South Korea delegation on an ‘invest in Am Samoa’ mission 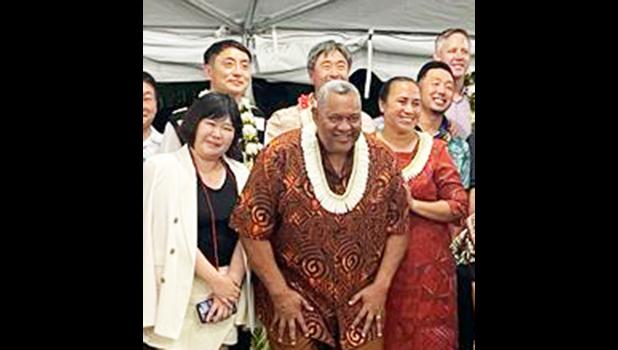 Pago Pago, AMERICAN SAMOA — A 15-member delegation from South Korea was in the territory this past week as part of an ‘invest in American Samoa’ mission.

The delegation’s first site visit was in Manu’a, the day after they arrived in the territory.

Upon their return back to Tutuila Island, Department of Commerce Director, Petti Matila gave them a presentation at the airport on why American Samoa is an attractive place to invest — the presentation was aired on KVZK-TV.

The presentation noted that “…we are a gateway to the US market here in the Pacific region.

“Any manufacturing company that wants to set up shop here in the territory and that you qualify for the made in USA label,” she said.

According to the director, American Samoa is also in the middle of the South Pacific and this proximity to supply chains to Asia and North America makes the US territory an important location in the region.

The director explained the local government has different types of business setups in the territory that can include foreign companies that can be set up as local corporations, as a limited liability corporation or even as a foreign corporation.

The territory’s minimum wage was also noted as “low” — when compared to the US mainland rates — even though its a US federal minimum wage.

For the labor pool, Matila pointed to having “access to both skilled and unskilled workers,” and that American Samoa also has its “own local Immigration and Custom systems”.

“What this means,” she said, “is it's not a federalized Immigration and Customs system that you have to go through if you have to set up a company here in American Samoa.”

Regarding technology, Matila said their goal is to have American Samoa as a Pacific regional hub for technology, now and into the future.

“There are two programs the Department of Commerce is involved with, such as the internet for all programs. This is a federal program where we're anticipating $25 million dollars from the US government to support high speed Internet and the key behind this initiative is affordability and accessibility to internet connection here in American Samoa.

“Second to that is our plan to build an innovation and technology park and within that Tech park we hope to include a healthcare zone, business zone and mixed uses including residential zone areas,” explained Matila.

During her presentation to the group of investors, Matila said in the health arena they have a medical plaza that's currently in the works through the Department of Commerce.

“This is our way of ensuring there is a commercial space for healthcare for our development needs here in American Samoa.

“And so that really does include a focus on medical tourism, private health care practitioners or clinics, even an opportunity to improve on telemedicine and tele-health in the territory.

“So the overall goal is we also want to be a Pacific regional hub for medical care in the Pacific,” she said.

According to the director, as for sustainability and other critical infrastructure — American Samoa is truly a hidden gem in the Pacific.

She said some of the projects or initiatives that they are working on through the Department of Commerce includes developing a living shoreline infrastructure.

“This is a nature based solution to address the impacts of climate change on island and they are also looking at implementing artificial reef balls with oysters because this is one way to reduce wave energy but also a microfiltration method; a natural method to clean up the pollution in the water.

“These are special management areas where we want to also provide an education opportunity and opportunity for tourism development in those special areas.

“We also have the Lions park lagoon that is currently on our plans right now and not only that we're also working on our drainage systems because this will resolve a lot of our flooding issues that impact homes and businesses across the territory.

“So these are full-on developments that are in the pipeline and will be implemented in the coming year and then lastly there's a need for more commercial flights to and from American Samoa,” said the director.

ASG went to learn more about the critical infrastructural development of Jeju Island with respect to sustainability and adaptation. Jeju is a world leading small island in the areas of renewable energy, electrical vehicles, and information technology.

Jeju is well known for its tourism, service, construction and infrastructure industries.