Wife of one victim found dead at sea in Amouli takes her case to A.G. 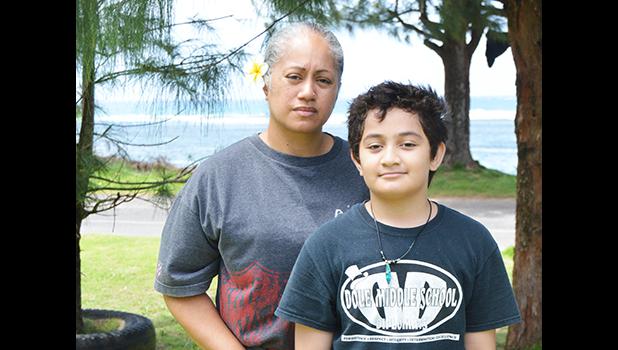 Weeks after the incident families say there’s no word from DPS on investigation
By
Ausage Fausia
ausage@samoanews.com

Pago Pago, AMERICAN SAMOA — While the police investigation into the incident where two men found dead at sea in Amouli more than three weeks ago is still up in the air and families of the two victims are still in the dark, the Attorney General’s Office has given the green light to conduct a full autopsy on one of the victims in an effort to determine the cause of death.

Three weeks ago, Monday, Sept. 28th, 2020, bodies of two men, alleged to be avid fishermen, Alofa Christian Togia and Junior Toleafoa were found floating at sea in the village of Amouli. Reports from the village allege that the two men drowned while net fishing.

Last week, family members of one of the victims, Mr. Togia met up with the territory’s Attorney General, Mitzie Jessop-Taase at her office, where she was briefed on some of the issues that the family wants answered.

One of the family’s main concerns is the amount of time the Department of Public Safety (DPS) is taking to investigate this matter.

A family member described the meeting as “smooth and nice” and the AG was “so good during the meeting” when she was just listening and allowed family members to ask questions and raise their concerns about the case.

“She understands our concerns and how we feel about the case. She’s interested in the case and wanted to review more information about this tragic incident,” a family member told Samoa News.

During the meeting last Friday Togia’s family requested a criminal investigation into this matter and the AG agreed.

According to the Togia family, the AG wants to review the video the family recorded during their interview with the Amouli mayor (pulenu’u), who was the last person to be seen with the two victims, drinking alcohol in front of his house, and also the first person to find the men’s bodies floating at sea. The family’s interview with the pulenu’u took place four days after the incident.

Speaking of the DPS investigation, members of the Togia family told Samoa News that almost three weeks have passed since their loved one lost his life at sea and they are still in the dark with the police investigation.

Togia’s wife, Frances J. Saelua-Togia said she contacted DPS headquarters last week but there was no update on the deaths.

“I was told that the investigation is still ongoing,” she said.

Families of both victims told Samoa News last week that in the almost three weeks since the incident, the police have never come to meet with them and update them on their investigation nor to interview them despite the fact that they have many questions that need to be answered about what happened.

Togia’s wife told Samoa News that she has many unanswered questions she wanted to ask but she don’t know who she should turn to for help. She tried many times to confront police investigators who are involved in the investigation, but every time she said she tried to speak to them — they avoided her.

“I’m one of the victims in this case and they were the right people I should turn to for help, unfortunately, it appears to me that this is not the case. I suspect that something is going on with people involved in this case,” Saelua-Togia said.

After not receiving any information from the investigators about the case, she then turned to the AG last week for help, hoping that the AG can assign a special investigator from her office to investigate this matter truthfully.

“Investigators need to investigate this matter properly and look for evidence that can help them with their investigation. Wounds on my husband’s head made me suspicious that something happened that led to his death. I don’t have the answer to that question, only the investigators can find the answer to my many questions,” Saelua-Togia said.

During an interview with the pulenu’u four days after the incident, he told Samoa News that he found Togia’s flashlight and it was damaged. He thought maybe the flashlight was damaged when Togia was swept up by a strong current.

“I saw my husband’s wounds and there was fresh blood I saw on his head, ears and face when I was with him in the [LBJ] chapel saying good bye,” she recalled.

People Samoa News interviewed from Amouli and Aoa disagreed with many of the statements the Pulenu’u allegedly made of the incident publicly — including that the tide was low that night, not high; while a fisherman said he never saw the two men fishing that night.

Samoa News obtained the weather bulletin for American Samoa for Monday evening, Sept. 28th from the Weather Service Office. The bulletin stated that on this particular night, it was low tide at 10 a.m and then again at 8p.m. with the surf 5-7 feet high.

Samoa News was also told that there were other people who were with the two men on the evening before their bodies were later found floating at sea, not just the pulenu’u.