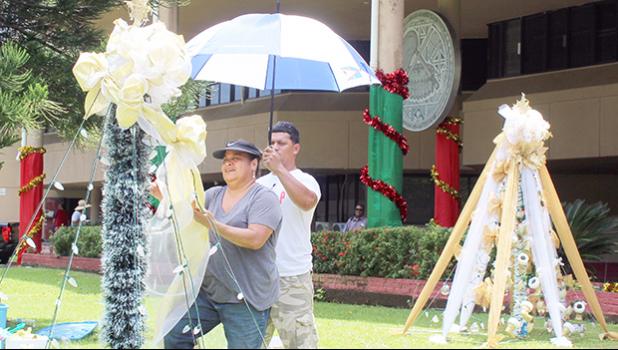 Pago Pago, AMERICAN SAMOA — The government sponsored Island Wide Clean-up this coming Friday — the day after Thanksgiving — also includes ‘decking the halls’ (or actually the streets) with Christmas decorations at designated locations on Tutuila. Specific areas will be decorated with Christmas wreaths while other sites will have Christmas lights.

In a Nov. 16 memorandum, the Governor’s chief of staff Loa Tuimavave T. Laupola informed cabinet members that all ASG departments, agencies, offices and authorities are expected to participate in the monthly cleanup, which “will initiate preparations for the holiday season and include Christmas and holiday decorations.”

According to the memo, ASG agencies are tasked to take part in and assist with this year’s Christmas decorations at various established zones throughout Tutuila as identified by the Island Wide Clean-up Committee (IWCC).

The memo included a breakdown of the established zones including zone-leaders and their respective members, which are ASG agencies.

An attachment with the memo shows that of the five-zones — four of them are to be decorated with Christmas wreaths, while only one with Christmas lights — Zone 5 — which has been extended to cover not only the airport/Nu’uuli road, starting from the intersection into Fagaima road, all the way towards the airport, but also the road that runs in front of the U.S Army Reserve Center in Tafuna and to the end of the airport security fence next to the runway night club.

ASPA and Public Works are zone leaders for light decoration, with the support of 19 government agencies.

Loa’s letter also explained to cabinet members that all Christmas wreaths are to “meet the standard dimension and to be strapped to the metal light poles at the identified height to maintain consistency and uniformity.”

Wreath dimension: Diameter: 1ft 8inches • Height: 6ft. However, Color and decorations of the wreaths are up to the department’s preference. Areas — Zone 1 to Zone 4 — decorated with wreaths starts from the guardrail in Nu’uuli next to Tony Ocean Mart and runs along the coast line to Ronald Reagan Marine Railways in Satala.

According to the chief of staff, each zone should identify the businesses or companies in their respective zones and solicit their support and assistance with the decorations of their premises.