Youth workers’ common theme is — contributing to my family 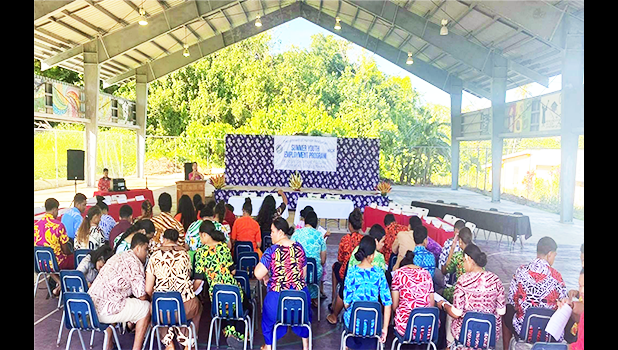 Pago Pago, AMERICAN SAMOA — In interviews with several of the young people taking part in the 2021 Summer Youth Employment Program (SYEP), the common thought offered has been how much they have matured since working in the program. While, the program is touted as a forward step for participants to future careers, it is also answering the need for participants to understand what it takes to become ‘a professional’ in any line of work they decide to make a career — and get paid.

In fact the common underlying theme each participant shared with Samoa News, as to their reason for working this summer was: To help provide for their families.

Many spoke of how important it was to them to contribute to paying for things after seeing how hard their parents struggle, while one participant commented on how liberating it felt to be able to earn their own money. Many also enjoyed working with different people their age and agreed that the SYEP is truly beneficial.

Ms. Langahelotu Vaivao, the fiscal officer for the Workforce Innovation and Opportunity Act (WIOA) division, which manages the 2021 SYEP program, stated that this year there were 1500 participants in the SYEP and the main goal of the program was to expose them to a work life-style that will enhance their choices in their careers.

She further noted how she has observed a great change in the workers in her division — from being prompt, to tidying up their workstations, and being able to perform tasks and not requiring as much supervision. So far, the SYEP has proven to be helpful in maturing the mindset of the youth as well as helping them gain the necessary experience for the future.

SYEP participant-employees shared some their experiences and insight with Samoa News as to what it has been like for them these past few weeks. And, there was a consensus among these participants that working at a young age has certainly matured their mindset and given them an idea of what it is that they would like to focus on — making a career of it in the future.

Some stated that they developed new interests through the work program at the departments they were assigned to, while others felt inspired to take a different career path, one that they found more worthwhile.

A SYEP participant at the Marine Wildlife Reserve stated that he did not realize how interesting the field of marine biology is and how much the island needs people in that field — until he started working there.

Another participant working at the Department of Agriculture stated how much he has enjoyed learning about the different things about nature and has grown a sense of appreciation for farming.