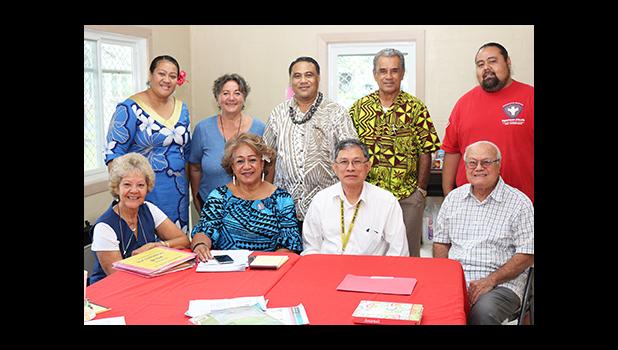 CDC Team Leader: Priority needs to be on testing of ALL pregnant women
By
Tony Gasu

The Center of Disease Control (CDC) reached out to American Samoa on the issue of our local Zika Virus cases, through CDC Team Leader Dr. Geronicio C. Fajardo, who was present during the 2016 CDC Zika Virus Response Media Round Table held yesterday morning at the Department of Heath satellite office in the ASG Tafuna housing area, across from Lions Park.

Dr. Fajardo is a trained physician with a graduate degree in Epidemiology from SUNY-Buffalo, New York and is currently working as an Epidemiologist in the Division of Preparedness and Emerging Infections- Emergency Preparedness and Response Branch of the US CDC in Atlanta.

During the press conference, Dr. Fajardo focused on what he considers is the biggest problem with the American Samoa response to the Zika virus — the lack of resources and tools, resulting in limited testing, especially of pregnant women.

Fajardo said there are a lot of people infected – but they're not showing signs of symptoms, "especially the pregnant women — that's why we’re focused on raising the numbers of testing that we do. The more information, the more research of the long-term consequences."

He said, "Testing pregnant women is our top priority as well as protecting pregnant women and those who want to become pregnant — my main concern from what I've observed is that not all pregnant women here in American Samoa are being tested, and that's because of limitations and I would really like to sit down with all the key players and address the priorities of pregnant women to be tested."

DOH's Epidemiologist Scott Anesi added, “What Dr. Gerry is trying to say is that we need to expand our testing to include those who have not had the symptoms – those that we've tested so far are all the women that come in with signs of symptoms of the virus."

Anesi added, “There are several limitations to expanding these tests – for one, the pool right now of pregnant women on the island is a large pool. One of the things that we need to focus at is knowing that this is going to be a long term effort because of the fact — the majority of the people that have the Zika virus don't know they have it, and more importantly, we don't know that they have it, so that's the next step in our services we are trying to expand.”

Fajardo also pointed out that it can take about one week to get the results from the screening, and if more testing needs to be done, more samples would be sent to Colorado, and sometimes it can take four to seven weeks to receive results.

He said that the challenge American Samoa is facing with the people here on island is that "the baby is at home, the virus has gone home (with the baby) — but we haven't gotten the results yet. That is one of the problems that I will discuss with CDC to see what we can do to help American Samoa.”

Anesi gave the current update of the Zika Virus numbers in American Samoa.

"As of now, the suspected case count is 776 and out of that there are 16 of which are pregnant women – we're investigating more into it right now, so the numbers should change on Friday."

He said, “One of the most important things everyone should know is that — all the guidelines we have in place are all based on trying to prevent and trying to be more proactive in the event that something might happen.”

Anesi added, "The biggest confusion is that there’s so much emphasis on the Zika Virus right now, not just nationally but globally and territorially – I think that the take home message is really about being proactive. With the help from CDC we are trying to make sure that we do as much as we can right now to prevent these things."

He told the media that they are trying to see "what we have on the ground, what resources we have and how we can deploy them to do the best possible job in responding to the Zika Virus — there’s so many different variables, but the main thing is that we're focused on Zika solely, but at the same time, we're also watching for everything else."

He said, "What is being done right now is to prevent the neurological disorder for these babies to occur from their mother – what we're doing is taking more supportive measures and hoping that the baby can last and live longer."

Tamasoaali’i Dr. John Tufa, the DOH Medical director, said, "You have to watch out for mosquito bites — protect the infected person from getting bitten by mosquitoes, otherwise that mosquito can spread the virus all over the place. Like Dr. Fajardo was saying, there's no specific treatment or cure – no medicine at the moment."

He added, "The Zika virus is not an infectious disease, it’s a mild problem. There are other viral problems like dengue fever and Chikungunya – but our focus is on the pregnant women, all pregnant women."

He said, “They will also go through other screenings like the Helping Hands Program, the Early Intervention Program, the follow ups are done at DOH – those babies that are born from Zika infected mothers, the intervals that they come in are just different from those that regularly come in for regular shots and things like that."

According to Tamasoaali’i, the biggest challenge they face with investigating the virus is newborn babies. “So right now we're partnering up with the Pediatrics Clinic — our first line of defense are the professionals at some of the programs that I've mentioned before.”

In terms of funding assistance from the CDC, Anesi said, "The funding sources that have been released right now have been for Vector Control – combating the mosquito population.”

He said, "The second avenue that we received money for — was for Prenatal Care as well as Community Health Center Development, the next funding we'll receive is for Registering Information – like Dr. Fajardo said that is one of the most important things that the CDC is looking for — data.

“So they send us money to build our local capacity of pregnancy registry to evaluate those that are born with complications and make sure that we have a surveillance system in place so that we can catch it early, and we can also have a comprehensive file — which has been funded by the initial funding we have received,” Anesi said.