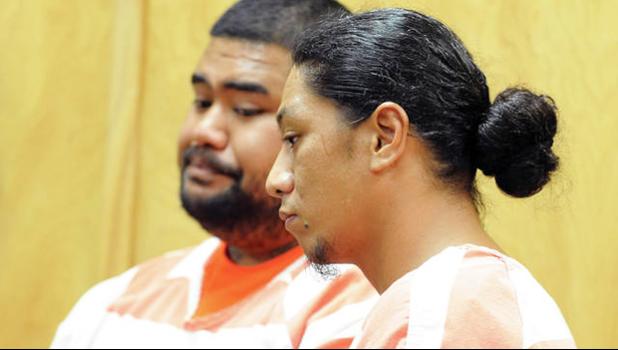 KEALAKEKUA — Not guilty pleas were entered Friday by a woman and two men accused of attempted murder after brutally assaulting a hotel security guard earlier this month.

Wesley Samoa, 30, of Kona, and Natisha Tautalatasi, 41, and Lama Lauvao, 30, both of Honolulu, each pleaded not guilty to a single charge of second-degree attempted murder filed in connection with the Sept. 17 incident at the Kona Seaside Hotel. Judge Melvin H. Fujino set trial for Jan. 29, 2018.

After entering not guilty pleas, each defendant’s attorney sought supervised release or a reduction in bail for their client.

Before ruling on the motions, Fujino questioned each defendant on their financial status. It was revealed that Samoa is a security officer at a resort in Kona. Tautalatasi and Lauvao are significant others who reside in Honolulu where Lauvao is a cook and Tautalatasi is a caregiver.

As Sheriff’s deputies escorted the three from the courtroom, family and friends who filled the gallery verbalized their support, telling the defendants “love you,” “bye daddy,” “I’m praying for you” and other uplifting statements.