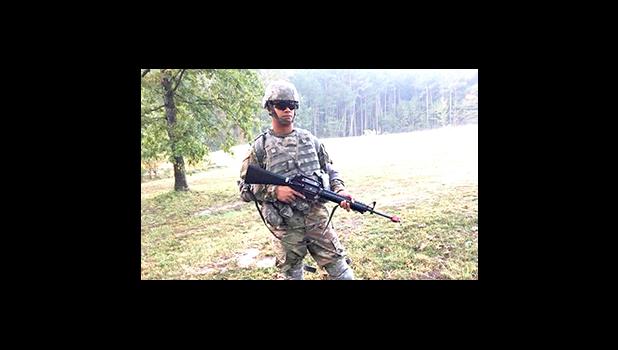 (Editor’s Note: Princess Auva’a used to work for Samoa News and is a transgender in the US Army. Samoa News wanted to share her experiences with our readers as more than a ‘social media’ comment, but as support for all our soldiers in the Armed Forces.

If you have an experience you wish to share with our readers, please send it to us via Facebook (https://business.facebook.com/samoanewsamericansamoa) or email samoanews.ads@gmail.com  — Thank You — Samoa News Management & Staff.)

Today was the last day of our Quarter Master Field Training Exercise (QM-FTX), and I will say that not only am I grateful, I am thankful and so happy that this portion of my Advance Individual Training (AIT) is done, dusted, and in the pocket. Meaning it is done and over! Thank you Father!

However, this training has really woken me up and has opened my eyes to the actual reality of things. Truth be told, it really scared me. With the field training, my class had to complete a mile course with a mission to extract and deliver a certain package. I was the Bravo team lead with a squad of 6, and I had died today. I was shot to death on fighting grounds in the kill zone.

Both teams, Alpha and Bravo, were getting ready to cross an open field, and seek cover in the wood line opposite of our location. The first team I had sent over had gone too far into the field. Obviously, they were not paying attention to instructions. As the rest of the team crossed over and secured the area and covered as I tried to return my soldiers, we were hit by mortars — and then immediately we were under attack and in direct line of fire.

Two of my team members were still out in the open. The rest of my squad had retreated to seek cover. I stayed in position to be visible to my team members. One soldier made it through safely, and I needed one more to be brought in.  As I signaled him to retreat towards the wood line, he got up and ran towards me as I covered him as he moved. I was in the kneeling position, my weapon on burst, and I made like Sylvester Stallone in Rambo and just started shooting towards the direction of fire. I went a bit crazy. Adrenaline kicked in. A little bit of fear had also, pulled on that trigger, and my emotions held that trigger down. I wasn't going to leave a comrade out there.

As soon as my battle buddy ran pass me and into the wood lines, I got up, backed up a few paces, I turned and lunged for cover.  BANG! I was hit. I went “Down”. (Of course we were shooting blanks, and the Bang was called by Sergeants who were observing)

I lay there on the ground as the gunfight continued. I turned to my left towards the open field and saw Sergeants dressed as the enemy, (Full legitimate costumes. turbans and all) advancing in on the field heading towards the wood line, shooting still. More explosions. More gunfire.  I turn to my right and saw my battle buddies in the prone position in the wood lines, returning fire. My friend and comrade, a tiny African American girl, turned to my direction and signaled for me to stay down as she rushed by my side. And I saw something in their faces that had my heart sink in pain. In their faces, I read uncertainty. They were being brave by fighting back, but they were also scared. Just like I was.

I understand that this is just a training, but, this is training us to be ready for the real thing. The real fight. The real battle. This is training for war.  (Maybe in real life, injured and what not, I would probably bitch slap the soldier that got me shot for being the dumbest, before I die!)

I laid there thinking, WHAT THE HELL have I gotten myself into? (I am a Beauty Queen. I'm fierce on the stage. I'm an Emcee. A businesswoman. Why am I here, laying on the dirty ground, playing dead, while people are shooting over me?)

Then it hit me. These soldiers training with me, my classmates, they're only kids. 17, 18, 19 years old.  Most of them have only finished high school. A lot of them have not yet lived their lives.  Here they are, returning fire, trying to pull me into safety. Fighting, for US, and I choose to fight with them, by them, and for them.

I have been walked through this training by trainers that have shown me videos, pictures, and have told us of stories of what has happened and what can happen in war. My stomach did cartwheels with what I saw.

Today, I can say, I have learned to appreciate my fellow soldiers more than I did before. My respect for the Soldiers serving now and those who served before has toppled over the scale.

Today, I have learned more than the lesson taught.  #Princess