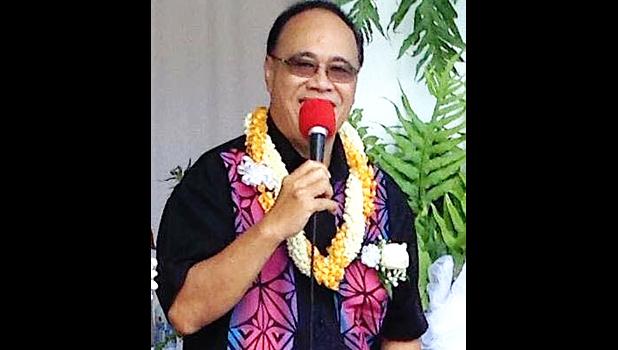 The sudden passing of Taeaoafua Dr. Meki Tavita Solomona, Director of the Department of Health and Social Services, is still being felt throughout the territory one week after he collapsed in his office, Monday, December 11, at about 11:30am of what is believed to have been a massive heart attack. His beloved wife of 28-years, Vaofu'a Soliai-Solomona was with him, she had stopped by to take him to lunch and has said, how grateful she was to be with her husband in his last hours.

Born on August 24, 1954, in the capital of Papua, New Guinea, called Port Moresby, Taeaoafua was the eldest son of Rev. Si'ulagi Tavita Solomona and his wife Fuarosa To'alepai-Solomona, Missionaries of the LMS church (London Missionary Society,) now CCCS/CCCAS.  His parents found great pride in naming him and his late sister Elisapeta Kunimaipa Solomona-Aigamaua, "Children of the Gospel," (Fanau ole Tala Lelei,) as they were born in the Ministry in foreign lands, while their parents preached the Gospel of Jesus Christ.

Taeaoafua's early education began in A'oga Faifeau (Sunday School) with his parents in New Guinea, when they moved back to their island home of Samoa, 1960, he began his official education at what was then known as "Mageo's School" in Pago Pago.  He was still learning to speak the Samoan language as he only spoke "Papuan/Niu Kini" and later attended the elementary public institution, "Fia Iloa Independence School" in Utulei for non-Samoan speaking students from first grade to eighth grade, Junior High. He had excelled in both English and Samoan speaking his parents wished to send him off-island to further his education.

He began high school in San Francisco while staying with his Uncle Sa'aga and Aunt Lelogoa Levi and later transferred to Los Angeles where he lived with more relatives on his father's side, his Uncle Alatina Teofilo and Aunt Saili Tufele-Teofilo.  He graduated from Carson High School and was part of the 1971-1972 California State football championship teams that he was always very proud of .  Earning an athletic scholarship to the University of California, Riverside, Meki successfully completed his Bachelor's degree in Political Science in 1976 and returned home to American Samoa to care for his parents and family.

In the summer of the previous year, 1975, he began part-time work as a disc jockey for the former Radio WVUV then Radio Samoa and now KHJ 103, to earn extra monies for his last year of college.  When he got a teaching position at the Samoana High School in his first year, 1976, he still moonlighted as DJ at WVUUV in the evening saying, "My Dad always picks up my check when I get paid at DOE, I needed extra cash."

Well known personality in the mid-70s to the youth and listening public, "Don Mac" was articulate and entertaining, he became a fixture in Flag Day broadcasting and public announcing, he was known for his commitment to teaching the young people of American Samoa, serving the government, his village, his church and his family. There were times he had ventured to further his education namely in Political Science but his devotion to his parents was deep.  Story has it that Meki's father was so impressed with then-young attorney and popular legal mind Roy Hall, Rev. Solomona was encouraged to send his eldest son to law school.  But true to the 5th Commandment of honoring one's parents, Meki remained home with those dear to his heart.

His father passed away in 1979, this young 24-year old promised his mother 'Rosa that he would always stay home in Samoa to take care of her and all of his siblings.  For the rest of his life, he kept that promise.  While still employed with the American Samoa Government's Department of Education, Meki earned his Masters and Doctorate degrees in BYU, Provo, Utah under the tutelage of then DOE Director Seuvaai Mere Tuiasosopo-Betham, whom he regarded as his Mentor and second Mom.  Taeaoafua was a high school teacher at Samoana High School from 1976-‘85, he became a Vice Principal and eventually the Principal, after which he was transferred to the DOE Central Office’s Grants & Special Programs Division 1985-1991.

In 1992, he became one of the Samoan Managers of the Star Kist Samoa Company, a place he toiled for nearly twenty years and where he is said to have found the ultimate privilege to be amongst the common folk, the working class of his Samoan people, those he loved to serve.  It was 1994 after burying his beloved mother Fuarosa that his family of the Taeleifi and Faiivae titles bestowed upon him the "Taeaoafua" matai name, to fulfill the wish of his mother to serve his families.  In his wife Vaofu'a's family of the Soliai title in Nu'uuli, he was known as "Fofoga o Aiga".

Taeaoafua retired from Star Kist Samoa in 2012 under the leadership of the first Samoan ever General Manager, Brett Butler, where the former high school principal was deeply proud of his student, who set the bar for Samoa’s youths that they too can manage a multimillion dollar corporation in the Pacific.  In that same year, after a grueling campaign season of the gubernatorial race, Lolo Matalasi Moliga and Lemanu Peleti Mauga were elected as Governor and Lieutenant Governor, respectively.  Taeaoafua did not remain idle and sought to further his service to his people by applying for any Cabinet position available in the new Administration.

Although, many past leaders of the American Samoa Government had long predicted the rise of this young son of the territory to prominence, Taeaoafua's only run for public office was in 2004 as the running mate of the Afioga ile Aloalii, Afoafouvale Leulumoega Lutu.  He was a strong force in the Coleman-Tufele, Coleman-Galea'i & Lealaifuaneva-Afoa campaigns.  He actively participated in local politics, believing the young people of American Samoa had an enormous say, and must make their voices heard about who is to govern and lead them.

Despite his political affiliations, Taeaoafua kept his highest respect and regard for those in his family with opposing views and assisted whenever required.  He and the late Governor Tauese served closely together for many years in their CCCAS Siona Leone church and worked side by side as well-known matais in their Faiivae family matters of Leone.  During Governor Togiola's terms, Taeaoafua's expertise while at Star Kist Samoa was often requested by the government; he responded favorably and willingly knowing it was for his people.  His unwavering support of Faoa and Taufetee in 2012 solidified the team's strong gubernatorial bid and when unsuccessful, Taeaoafua's firm stance was reminiscent of years of political experience... "ia tatou malolo fa'atamāli'i."  Coupled with his deeply rooted Biblical beliefs that if we prayed, and this is what God allowed, then to God be the glory.

Governor Lolo appointed Taeaoafua as the Director of the Department of Health and Social Services in January 2013, a position he held until his sudden passing a week ago, Monday, December 11th.

Everyone who knew him, knows Meki Tavita Solomona, Taeaoafua, Fofoga o Aiga, Dr. Meki, would not let anything hinder his service to his people. When he began dialysis treatment in Seattle, Washington after a government meeting in Las Vegas in June this year and attended the funeral of his dear friend from Carson High School, Kise Fiatoa, it was determined Taeaoafua required immediate medical treatment, he proceeded with doctor's orders of becoming a dialysis patient.  However, as soon as he was given the green light to travel home in September, nothing was going to stop him from returning to his beloved people, his family, and his island home.  Asked if he was not leery of the LBJ Hospital and all the fuss with the island's only medical facility, his simple reply was, "O lea lava e lelei le tatou Dialysis unit, they're trying the best they can with what they have."

When reached for a comment on this tragic turn of events in the end of his first year, of his second term, Governor Lolo M. Moliga was saddened by the sudden demise of one of American Samoa's most diligent and vibrant public servants, a trusted Cabinet member and a very dear friend, Governor Lolo held that Taeaoafua succumbed to God's omnipotent will and what He alone has allowed to occur.  That in the passing of beloved Taeaoafua Dr. Meki Tavita Solomona, a greater good will arise for the people of American Samoa and all those whose lives Taeaoafua has touched.

The families are finalizing plans for the celebration of Director Solomona's life for the first week of 2018. His Leone CCCAS "Siona le Mauga Paia" church where he served as Deacon for many years and church General Secretary, are in deep shock and mourning but readily accept the words of the Savior that Taeaoafua believed in, "Blessed are those who mourn, for they will be comforted."