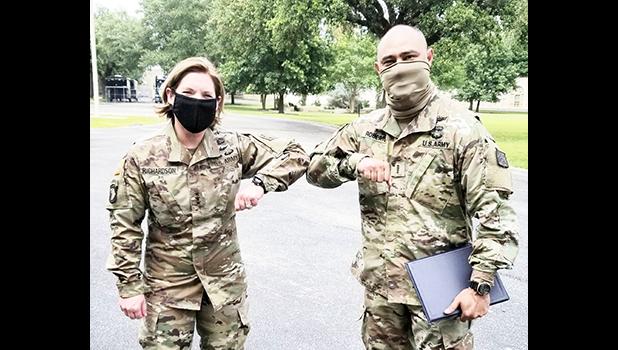 San Antonio, TEXAS — A son of American Samoa is serving on the Dept. of Defense’s COVID-19 Response Team where he was instrumental in providing logistical oversight, management of medical supplies and synchronizing efforts in transporting medical equipment to all forces, in every region across the country during the pandemic.

The award was presented in recognition of his meritorious services and extreme technical competence as a member of the J4 Sustainment Readiness Division for JFLCC. He was instrumental in providing logistical oversight, management of medical supplies and synchronizing efforts in transporting medical equipment to all forces, in every region across the country. His efforts directly contributed to the JFLCC’s success in supporting DOD’s COVID-19 Response Team, USARNORTH, the United States Army and the United States of America.

CW4 Roberts is from the village of A’asu and Aoloau. A proud son of the late Anae Tafaifa Sinapao and Vaepa Uiagalelei Roberts and a graduate of the 1990 Marist Brothers Crusaders High School.

After serving several months during the height of the global pandemic, service members are finally returning to their home stations pending completion of redeployment requirements.

“It was an absolute honor and a personal career highlight, serving our great Nation during this critical turning point of our lives,” CW4 Roberts told Samoa News via email.

The Coronavirus 2019 Response Team included medical and logistical support from the Army, Navy, Air Force, and Marine Corps from both active, guard and reserve components who were all working closely with federal, state and local partners to help the American people in their time of need.

United States Army North serves as the Joint Force Land Component Command (JFLCC) for all federal ground troops, including other service units serving on land as part of the DOD’s COVID-19 response team.

The JFLCC continues to work in concert with FEMA and local and state authorities, to extend mission assignments where requested to sustain medical support to facilities in need. Federal military forces staffing the Javits Center in New York City and Alternate Care Facilities in Detroit, Boston, Philadelphia, Dallas and New Orleans have concluded their medical support.