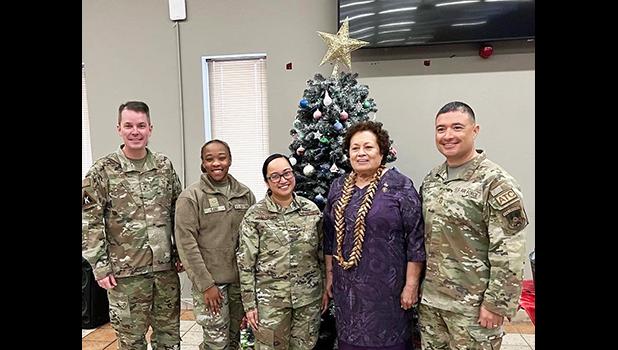 Washington, D.C. — Congresswoman Uifa’atali Amata was in Qatar the day after Christmas celebrating the season with members of the U.S. military, the third nation in the Middle East for the bipartisan Congressional Delegation (CODEL), and then they wrapped up their visits spending time with U.S. personnel in Greece.

Amata was delighted to meet up with Agueda Vaiola Leleua of Pago Pago Village in Qatar. She was able to see Samoans at each of the three Middle East sites, as is likely at most military location visits.

“In Qatar, it was wonderful to catch up to yet another of our own from American Samoa, and spend time with Agueda Vaiola Leleua, where she is doing good work and serving the nation in the Middle East,” said Congresswoman Amata. “Each of the Samoans were doing well and thinking of home and family. It’s been such a pleasure every step of the way to be with our military throughout the Christmas season.”

On previous days, after departing from Joint Base Andrews with the U.S. Air Force, they had visited U.S. personnel in Bahrain on Christmas Eve, then Kuwait on Christmas Day, serving Christmas dinner and taking part in activities at each stop, as well as foreign affairs visits with dignitaries in these nations.

Members of the CODEL that visited U.S personnel in the Middle East as well as Greece took part in activities at each stop, including serving Christmas dinner at one of the bases. [photo: courtesy]