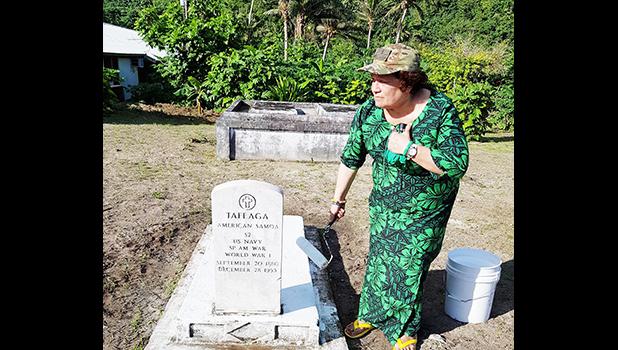 Washington, D.C. — In messages of tribute from Governor Lemanu P.S. Mauga and Congresswoman Uifa’atali Amata, they honor the anniversary of the United States Navy’s founding, which dates back to 1775, when the Continental Navy was established even before the Declaration of Independence. Its’ official birthday, its’ founding day is Oct. 13, 1775.

Lemanu notes that the US Navy is celebrating “246 years of dedicated service to our great Nation… We sleep safely, knowing that countless Navy mean and women ‘forged by the sea’ safeguard our Nation from imminent danger and continuously maintain freedom of the seas.”

“On behalf of Lt. Governor Talauega E.V. Ale and our families,” the governor said, “we honor and celebrate our sailors both past and present.”

In her tribute message, Congresswoman Uifa’atali wished the US Navy a happy birthday, pointing out that “it started with the Navy.”

“Our earliest known U.S. serviceman was Navy Seaman Tafaega of Olosega Island, Manu’a. Remarkably, he was already serving before the turn of the century in the Spanish American War and then World War I.”

She continued, “We have many Veterans and many serving now, in the Navy and every Service. Our military families know the pride of seeing their Toa o Samoa in uniform, but also miss them for months and years at a time.”

Both leaders thanked the men and women in our all-volunteer forces, and for their enduring commitment to defend our nation with unwavering resolve.

They each concluded their messages of tribute as follows:

Amata — “On this occasion, God bless all our Sailors past and present as we specially think of them.”