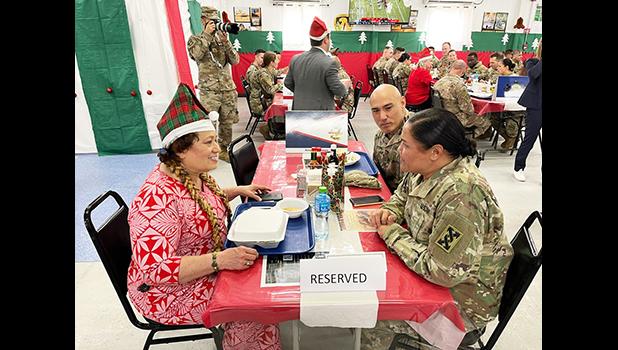 Washington, D.C. — Congresswoman Uifa’atali Amata once again visited U.S. Service Members in international locations for Christmas. Each time, she sys she is humbled and delighted to thank them in person for their service, and be able to show support in this way. So far, Members of Congress spent time with Service Members in Bahrain and Kuwait.

American Samoans have a high enlistment rate, and she generally meets up with Samoans at nearly every stop, and seeks out Pacific Islanders where she can, knowing they are thinking of home.

Uifa’atali Amata was in Kuwait for Christmas Day with U.S. Service Members as part of the bipartisan Congressional Delegation (CODEL), visiting the second country of their holiday weekend with the military. Delegation Members first served Christmas dinner to the troops before joining them for the meal.

in Kuwait on Christmas Day Amata met with U.S. Service Members where later in the day CODEL Members served Christmas dinner to the troops. [courtesy photo]

In Kuwait, the delegation also met with Foreign Minister Sheikh Salem Abdullah Al-Jaber Al-Sabah discussing security, economic and educational issues, and the stability of the region.

She is often able to meet up with Samoans on such visits, on this occasion spending time with Col. Manu Davis and Sgt. Christopher Kitiona.

“It was a delight to see Col. Manu Davis and Sgt. Christopher Kitiona, and celebrate on Christmas Day with our military to let them know our support,” said Congresswoman Amata. [courtesy photo]

“I was thrilled to meet up with one of our very own at our first stop, Ms. Tracy Feagiai of Manu'a, who is serving our nation and the Defense Department as a Fire and Medical Dispatch Supervisor in the Middle East,” said Congresswoman Amata. [courtesy photo]

“It’s a special joy and an honor to be with our dedicated Service Members at Christmas, and just say thank you,” she continued. “I know that their families are thinking of them this season and every season as they serve our nation in the Middle East. As Members of Congress, we want to let them know how very much the nation appreciates and supports them and their mission on behalf of peace and freedom.”

The CODEL had a packed Christmas schedule in the Middle East visiting troops in multiple places, and seeing firsthand some of their efforts in the service of the nation.