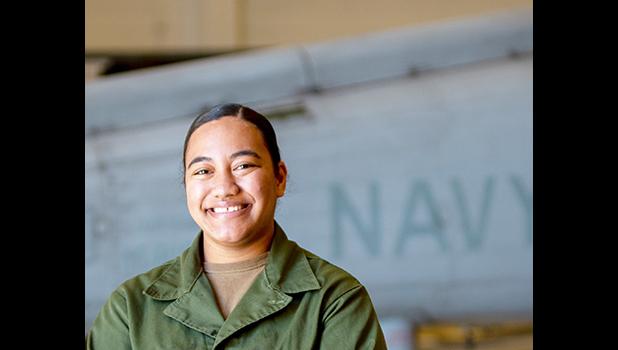 San Diego, CA — An American Samoan is serving in the U.S. Navy at a helicopter squadron that flies the newest and most technologically-advanced helicopters.

“I joined the Navy to help my family,” said Vaigatolo. “I also wanted a chance to explore the world.”

“I feel the most important thing that I was taught was that in order to develop and become a leader, you first have to serve,” said Vaigatolo.

These lessons have helped Vaigatolo while serving at Naval Air Station North Island.

Vaigatolo serves with the “Wolf Pack” of Helicopter Maritime Strike Squadron (HSM 75), a San Diego-based squadron that operates the Navy’s next generation of submarine hunter and Anti-Surface Warfare helicopter, the MH-60R Seahawk. Each helicopter is nearly 65 feet long, may weigh up to 23,500 lbs. (max gross) and can travel over 120 miles per hour for nearly 320 miles on a tank of gas.

"HSM 75's mission is to conduct combat operations as an integral part of Carrier Strike Group Nine and Carrier Air Wing Eleven,” said Cmdr. Thomas Mashuda, commanding officer, Helicopter Maritime Strike Squadron 75. “Our mission success requires all hands work in unity as a pack. Every member of HSM 75 plays a vital part of our mission, from the most junior aviation maintainer to the pilots."

According to Navy officials, the MH-60R is the most capable multi-mission helicopter available in the world today. It is used for a variety of missions, including hunting and tracking enemy submarines, attacking enemy ships, search and rescue, drug interdiction, delivering supplies and supporting the Navy’s special operations forces.

With more than 90 percent of all trade traveling by sea, and 95 percent of the world’s international phone and internet traffic carried through fiber optic cables lying on the ocean floor, Navy officials continue to emphasize that the prosperity and security of the United States is directly linked to a strong and ready Navy.

Vaigatolo and the sailors they serve with have many opportunities to achieve accomplishments during their military service.

“Winning Blue Jacket of the Quarter for our strike group has been my biggest career accomplishment to date,” said Vaigatolo. “My hard work and dedication was rewarded, and my family was proud of me.”

As Vaigatolo and other sailors continue to train and perform missions, they take pride in serving their country in the United States Navy.

“Serving in the Navy means I've fulfilled my dream,” added Vaigatolo. “I always wanted to be here and I'm excited about what the future holds.”