An American Samoa wounded warrior gets the gift of a lifetime 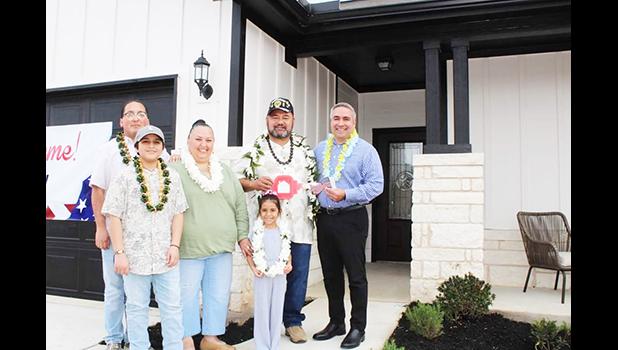 Leander, TEXAS — A partnership of organizations determined to make life better for America’s wounded warriors is doing it in a way that can last a lifetime — with a brand new mortgage-free home. And one of American Samoa’s Toa o Samoa received his brand new home just as the pandemic broke out.

“Operation FINALLY HOME” along with “Pulte Built to Honor™” program was excited to provide the Taetuli family with their custom-built, mortgage-free home in Leander, Texas.

Taetuli, a native son of Vaitogi, American Samoa, graduated from Samoana High School in 1985 and enlisted in the Army on February 29, 2000 as an Infantryman at the age of 32.

He is the son of the late Rev. Sani Va'alele Taetuli.

You can tell by the look on his face just how much “Operation FINALLY HOME” means to SFC Taetuli. A Purple Heart recipient, Taetuli selflessly served his country through two deployments to the Middle East. [courtesy photo]

The Sergeant First Class is now medically retired after wounds received from combat. A Purple Heart recipient, Taetuli selflessly served his country through two deployments to the Middle East.

While deployed to Al Najaf, Iraq in 2004, SFC Taetuli led his team to clear a basement of a house to eliminate three insurgents and found himself in hand-to-hand combat with the lead insurgent. After he severely wounded the insurgent, a grenade dropped between them and detonated.

SFC Taetuli was severely wounded but able to crawl up the stairs to seek medical help, ultimately saving his fellow service members’ lives.

For his valor, SFC Taetuli received a Purple Heart, Afghanistan Campaign Medal with two Campaign Stars, Meritorious Service Medal, five Army Achievement Medals, five Army Commendation Medals and many more. SFC Taetuli is pending his Medal of Honor award for his act of Valor, Bravery and Heroism in the face of the enemy that saved the lives of his soldiers.

SFC Taetuli suffers from Post-Traumatic Stress Disorder (PTSD), migraine headaches, and injuries to his neck, knees, lower back and both shoulders as a result of his service. He sustained shrapnel to his right leg, groin area, the right side of his face and left eye for which he had surgery to remove the shrapnel that penetrated behind his left eye.

Vaitogi native son Vaitogi Sani Taetuli and his wife Leticia pose for a photo with their children in their new home in Leander, Texas. [courtesy photo]

SFC Taetuli, his wife, Leticia, and their family are active members of the Samoan Congregation Church Choir. Though SFC Taetuli is still undergoing treatment, his family enjoys spending quality time together and barbecuing in the yard of their home.

Thank you for your service SFC Taetuli and thank you to the organizations that are making life better for our heroes.

ABOUT BUILT TO HONOR

PulteGroup’s Built to Honor program was launched in 2013 to recognize and thank returning military personnel who have been injured during their term of service by providing mortgage-free homes to veterans and their families. Built to Honor works in partnership with nonprofit organizations to select veteran candidates across the country. In the last 5 years, Built to Honor has delivered homes to 50 veterans and their families as they transition out of the military and into a new phase of their lives. As a top homebuilder, providing a home is the best way for PulteGroup to give back to the nation’s service members.

The Taetuli family receives the key to their new home as they pose with some of the people who made it possible from the organizations “Operation FINALLY HOME” and “PulteGroup’s Built to Honor” program.[courtesy photo]

PulteGroup, Inc. (NYSE: PHM), based in Atlanta, Georgia, is one of America’s largest homebuilding companies with operations in approximately 40 markets throughout the country. PulteGroup conducts extensive research to provide homebuyers with innovative solutions and consumer inspired homes and communities to make lives better.