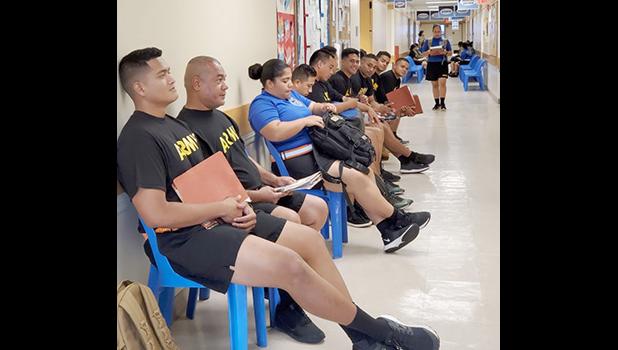 Pago Pago, AMERICAN SAMOA – Tutuila, the largest and the main island of American Samoa, measures only about 21 miles across and about three miles from north to south. Yet this island is home to over 200 U.S. Army Reserve Soldiers assigned to the 9th Mission Support Command, headquartered in Honolulu, Hawaii.

These Soldiers have the responsibility of maintaining individual readiness in order to be combat-ready and prepared for mobilization and deployment in support of worldwide contingency.

“American Samoa is really important territory for the United States of America, particularly for the military,” said Brig. Gen. Timothy Connelly, commanding general of the 9th MSC. “The Soldiers that are here [provide] an advantage to us because it gives us a population of Soldiers that are forward postured in the South Pacific, closer to the South China Sea, closer to Australia, and Oceania and all of our allies in the region.”

To enhance and maintain Soldier readiness, the 9th MSC conducted an annual mass Soldier Readiness Processing event at the Pele U.S. Army Reserve Center in Tafuna, American Samoa Dec. 7-8 to ensure all medical, dental and administrative requirements were in compliance.

An annual SRP generally consists of administrative requirements such as ensuring family data and financial benefits are up to date, medical assessments and dental examinations. Additional 9th MSC staff from the headquarters in Honolulu and health care providers from Logistics Health Incorporated were flown in to assist with the SRP.

“Being in American Samoa is hard [for medical and dental examinations or treatment] because they have very little providers,” said Lt. Col. Alejandro Buniag, Officer in Charge for the SRP. “Some Soldiers use the Veteran Affair’s clinic; otherwise, they would have to go to Hawaii.”

However, with the additional resources brought in for this event, 209 Soldiers were processed in two days, including 174 Soldiers receiving dental exams and 188 completing a Periodic Health Assessment.

There were some minor challenges during the event.

“The main hiccup was the network system,” said Buniag. The computer systems needed to be updated. “But the staff was ready to do everything manually, annotating who completed what, and from there, go into the system when it was functional and update it.”

Despite the slight networking issues, the event ran smoothly and efficiently.

“For the most part, the Soldiers will be where they need to be, and they will wait and they will endure it and get it done,” said Buniag. “It can get stressful, but in the end, I’m always an optimistic person. I know that despite whatever challenges, we will get through it and be successful.”

American Samoa is the third location that has completed the consolidated SRP. The remaining 9th MSC units at other locations such as Alaska, Guam and Saipan are projected to receive their SRP in the upcoming months with the entire command completed by Jan. 2020.