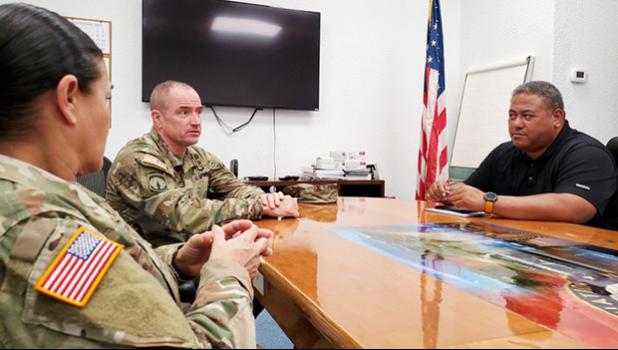 Almost two years later, the Army Reserve of the Pacific, continues to maintain its readiness and seeks opportunities to be optimally postured to support the island in the event of an emergency.

“We stay in close step with FEMA and keep our facility and our Soldiers as prepared as we can, within the resources we have available, to provide support to disaster [relief efforts] should it ever occur,” said Brig. Gen. Timothy Connelly, commanding general of the 9th Mission Support Command. “We hope it doesn’t, but if it does, we want to be as ready as we can.”

To be better postured and more efficient in recovery operations, Connelly met with key leaders and local authorities to request flight line access adjacent to the reserve center.

“Our operation would be significantly enabled if we were to back an aircraft right up to the reserve center, open up the gate, and with both local airport security and military personnel controlling access, we would be able to offload a forklift, offload those materials and position them immediately inside the reserve center yard where FEMA can have direct access,” Connelly explained.

Airport Authority representatives are open to options, but there are some challenges.

“One of the issues we have is limited space. We have an airport expansion plan that projects 5-10 years of expanding and planning on developing,” said Chris King, Deputy Director to Airport Authority. “These plans are set in advance and approved by the Federal Aviation Administration.”

Airport Authority personnel are willing to analyze and weigh all alternative and available courses of action.

“It’s a juggling game for us. We have to figure out ways to be able to make it happen,” said King.

The Theater Support Group, under the 9th MSC, will coordinate with the Army Corps of Engineers to develop a design plan.

This concept was also discussed with representatives of the Congresswoman’s Office, FAA, and Lt. Governor Lemanu Mauga. Officials were also open to the idea of finding viable solutions to expedite and facilitate recovery operations.

Uta Dr. Tagoilelagi, Senior Policy Advisor to the Congresswoman, asked for a copy of these plans when they are available.

“I don’t see a problem,” said Tagoilelagi. “What you’re talking about should be first priority. I don’t know what else is more important than that because you never know.”

At this time, TSG will coordinate with engineers and other stake holders to create a design plan. No timeline has been set to present these plans for consideration.