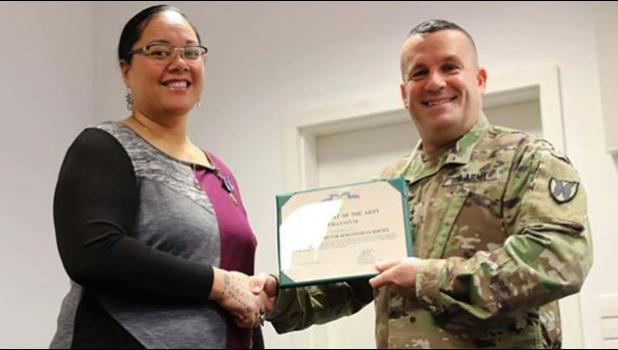 Faiivae is a US Army veteran turned civilian whose "quick action in applying life-saving measures to a choking soldier" earned her the Award, which is the civilian equivalent of the Soldier's Medal.

Faiivae joined the 21st TSC in January 2018. According to the 21st Theater Sustainment Command, last year, following a volleyball game, Faiivae noticed that the event's DJ was having trouble breathing. She could hear him coughing forcefully and noticed that he was holding a hamburger. Faiivae asked if he was ok but he didn't answer. She hit him twice on the back and he hit the ground. That's when she screamed for help.

Before anyone could render assistance, Faiivae lifted the man off the ground and started performing the Heimlich maneuver.

“All I could think of was how I just saw this man sitting with his family, his wife, his children in between taking the stage to play music…It was crazy because I really felt God led me to the right place, at the right time."

The Civilian Award for Humanitarian Service is both an honorary and public service award presented by the Department of the Army to individuals who have "distinguished themselves by meritorious direct 'hands-on' participation in an act or operation of a humanitarian nature" directed towards one person or a group of people.

Faiivae, in her comments during the award ceremony, said her quick actions were a direct reflection of three things: mommy instincts, military combat life (saver) training, and the Lord.

She said those were the three "reasons" why she was able "to make a difference during a time of emergency.”

Brittany Jones of the 21st TSC quoted Faiivae as saying, “We train as soldiers to be able to help our battle buddy in their time of need. The combat lifesaver training provided me with the needed skills to be able to perform but never did I expect to have to use those skills in real life. The entire experience was truly humbling and a blessing to have God use me in such a way.”

Faiivae's Award reads: "Her professionalism, strength, and courage were instrumental in saving the life of SSG Maurice Fowler. Her extraordinary efforts and accomplishments are in keeping with the finest traditions of civilian service and reflect great credit upon her, the 21st Theater Sustainment Command, United States Army Europe, and the United States Army."