From Samoa to Romania with a few stops in between — Staff Sgt. Sapa Taala 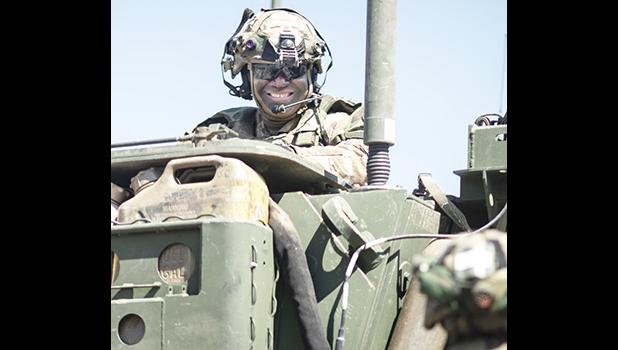 Sibiu, Romania — Growing up on Savaii in Western Samoa, Staff Sgt. Sapa Taala, 47, dreamed of joining the U.S. Army. He vividly remembers the moment he knew he wanted to enlist.

“Back home in Samoa, I was watching the liberation of Kuwait on a small black and white TV during the first Gulf War. I was just a kid, but I thought maybe, just maybe, one day I would be in that uniform,” remembered Taala.

In 2006 Taala applied for a green card and, along with his wife, moved to California. Unable to find suitable work in the U.S., he spoke to an Army recruiter about his options. Luckily for Taala the age limit for enlistment had recently been raised and, at the age of 38, he enlisted as an infantryman in the United States Army. Today Taala serves with the support of his family, both in the United States and back on his native island.

Taala’s mother still lives in Samoa and the soft-spoken staff sergeant makes an effort to speak with her every day, even though the eleven-hour time difference between Samoa and his home base of Vilseck, Germany presents a challenge. Although Taala has been away from his home island for many years, yet surprisingly, there is one place other than Samoa he can’t wait to get back to.

“I miss my mother and I miss parts of Samoa, but I really can’t wait to get back to Alaska. It’s not too hot and there is so much to enjoy in nature and in the outdoors. It’s my favorite place on earth,” Taala said as he thought back to being stationed in Alaska early in his army career.

Alaska would certainly be a nice reprieve from the current 87-degree Romanian heat. Standing in full gear next to his Stryker infantry carrier vehicle. With sweat pouring from under his advanced combat helmet and down his camouflage-painted face, Taala took a moment to reflect on what he says is the highlight of his Army career thus far.

“Halfway through my first deployment to Afghanistan in 2012, I traveled from my forward operating base in the southern part of Afghanistan, up to Kandahar to be sworn in as a U.S. citizen,” said Taala. “There I am, a soldier in the best Army in the world, downrange in Afghanistan, and I’m raising my hand to become a citizen of the United States. It was one of the best moments of my life.”

Taala is a weapons squad leader for 1st Platoon, Comanche Troop, 1st Squadron, 2d Cavalry Regiment. He arrived at his second-to-last stop in Sibiu, Romania before his convoy continued to the Joint National Training Center in Cincu. While in Cincu, Taala and his platoon will continue the mission to train alongside their Romanian allies as part of Saber Guardian 19.

Saber Guardian 19 is an exercise co-led by the Romanian Joint Force Command and U.S. Army Europe, taking place from June 3 - 24 at various locations in Bulgaria, Hungary and Romania. Saber Guardian 19 is designed to improve the integration of multinational combat forces.