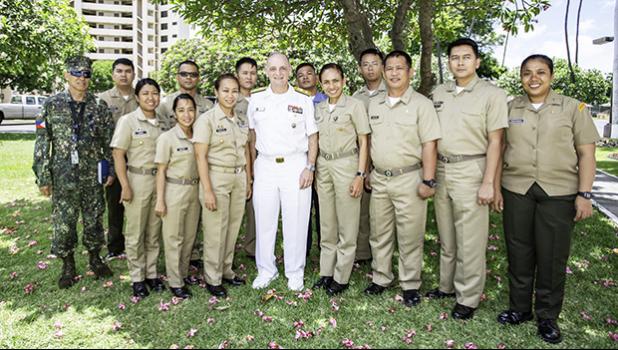 Honolulu, HAWAII — The U.S. military is launching a new effort to support and coordinate health care efforts across Pacific islands, where even on American soil health services and outcomes lag far behind U.S. states.

On Tuesday, more than 100 people gathered at the University of Hawaii John A. Burns School of Medicine in Kakaako to discuss the new Indo-Pacific Command’s new initiative, the first of a three-day conference intended to launch a year-long planning process. Attendees included military doctors, local physicians, academics, public health workers, U.S. government officials, USAID officials and embassy officials from Palau, the Marshall Islands and the Federated States of Micronesia.

Fresh off a visit to several U.S.-affiliated Pacific islands, Rear Adm. Louis C. Tripoli addressed the group, emphasizing that the Indo-Pacific Command does not want to re-invent the wheel but rather learn about existing programs, leverage current funding, and improve the efficiency and effectiveness of ongoing regional health care efforts.

He noted that the U.S. military already supports health care in Pacific island nations and territories but this would be a more collaborative effort to find solutions that are both sustainable and self-sufficient.

“It’s important to all of us to do this but it’s not just important, it’s the right thing to do,” Tripoli told attendees. “There are people who really need better health solutions than what they have and I think we have an opportunity to do this for them. ”

In an interview, he told Civil Beat this is an opportunity to leverage the military’s expertise in logistics. He said what’s different about this initiative is “the opportunity to get together with the University of Hawaii and other government agencies to form an outcome that is greater than the sum of its parts.”

“The successful outcome for me would be to develop a health care infrastructure and workforce that’s composed of the people who live there,” he said.

Tripoli noted that U.S. Indo-Pacific Command’s new leader, Adm. Philip Davidson, “believes strongly in this initiative to enhance what it is that we do out here in the Pacific, and also to enhance our relationships with partner nations, territories and the state of Hawaii.”

Tripoli announced that he’s set an internal goal of one year from Tuesday to make progress. Even though the year will be largely dedicated to planning, he also wants to take action in the next six to 12 months.

“We need to show some progress. We need to have some wins,” he said. “We are going to do everything we can to be aggressive in figuring out what those are and get there. Because if we don’t move this glacier in a year, I don’t think anybody is going to believe that it’s going to happen.”

Diabetes, obesity, and hypertension are among the major problems. A 2016 report by the World Bank found that lack of progress on noncommunicable diseases was hurting Pacific island economics.