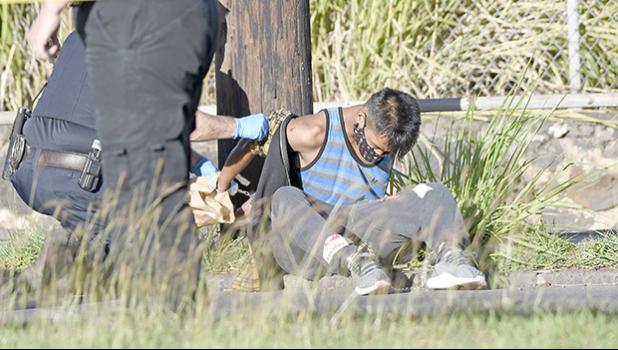 By
Barry Markowitz
According to Honolulu Emergency Medical Services a man in his 20s suffered gunshot wounds following an officer-involved shooting on Kalakaua Avenue in McCully.

Honolulu, HAWAII — A Hawaii Fire Department firefighter continued CPR on a robbery suspect who was shot by Honolulu Police Department while trying to avoid apprehension in a flood control canal adjacent to Kalakaua Ave. in Honolulu late Monday afternoon.

HPD and HFD cut fencing and used a ladder to access the alleged robber from the flood control canal and bring him to EMS and the waiting ambulance.

The suspect was reported dead by HPD at 5:57pm Hawaii time.

A Hawaii Fire Department firefighter continued CPR on a robbery suspect as he was transported to EMS and the waiting ambulance. The suspect later was pronounced dead. [photo: Barry Markowitz, 5:34pm, 4/5/21]

The incident occurred on Monday, April 5 when police located a stolen vehicle linked to multiple robberies.

More details as they become available.