2020 outlook for the 2Samoas and our Pacific neighbors 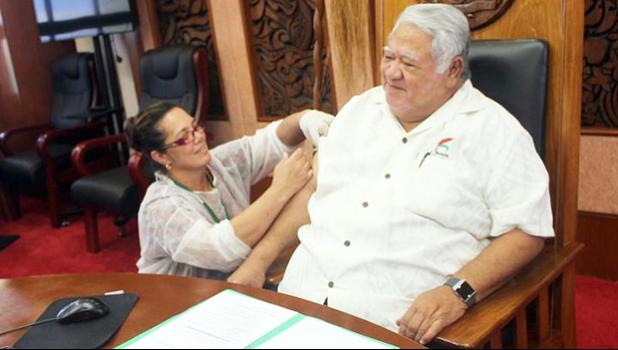 As a new decade dawns much of the Pacific is grappling with major upheavals from climate and health crises to political disruption and self-determination struggles. RNZ Pacific's Jamie Tahana and Johnny Blades look at the state of play across the region's countries and territories and what's on the cards for 2020.

Samoa ended 2019 in tragedy. From October, the country was ravaged by a measles epidemic that has so far claimed the lives of 83 people, most of them children under five. A state of emergency saw schools closed and public gatherings restricted. At its peak, the measles was killing five or six people a day, hospitals and clinics overflowed, some families lost multiple children, while medical staff worked weeks on end to try and contain the spread of the world's most infectious disease. Today, the epidemic is on the wane after a mass vaccination effort, but the ramifications will ring out for some time, as will the public demand for answers to myriad questions over the response to the epidemic and how the country became so vulnerable in the first place. The government has so far resisted calls for an inquiry into the epidemic, with prime minister Tuilaepa Sailele Malielegaoi last year saying those who suggested an inquiry showed a "lack of common sense". For the thousands of families affected by the crisis, that's unlikely to be enough. Many families are still struggling and will be for some time, with growing concerns about mental health services in the wake of the outbreak.

In other areas, three people - including the prominent blogger King Faipopo - will stand trial over an alleged plot to assassinate the PM. Also in court, the government looks set to continue its battle with the country's largest church over its pastors' refusal to pay income tax. In an embarrassing blow last year, the case against 20 pastors was thrown out for lack of evidence.

To the east, when the measles first appeared, American Samoa brought in strict quarantine measures. Today, 12 cases have been confirmed, and a state of public emergency has been extended, with a mass vaccination campaign as well as restrictions on public gatherings and at the border. Politically, the territory will go to the polls for governor in November. The gubernatorial elections will be on the same day as the US presidential elections, although American Samoans are unable to vote for president. As a territory, their delegate to congress can't vote either and its people are US nationals, not citizens. However in December, a US court ruled this arrangement illegal, saying American Samoans should be citizens. But American Samoa itself plans to appeal against that, arguing the current arrangement suits it just fine as it allows for self-determination and for Samoan cultural elements to be incorporated into the territory's governance. This debate will no doubt play out for a while yet.

On 12 September 2019, 'Akilisi Pohiva, the long-time democracy fighter who eventually became prime minister, died in an Auckland hospital, setting off a wave of mourning. He had been ailing for some time, presciently telling the Pacific Islands Forum meeting in August that it would likely be his last. For decades, Pohiva had been a thorn in the side of Tonga's trenchant establishment, biting at the heels of the monarchy and nobles, and wildly popular with Tongan commoners. But as prime minister, he faced difficulties being a member of the establishment he had spent a lifetime railing against. Parliament had been dissolved in an attempt by the monarchy to have him ousted, but Pohiva only came back stronger. 'Akilisi Pohiva's son, Siaosi, narrowly won the by-election for his Tongatapu seat, which he described as an endorsement for ongoing political reform. But it's still unclear whether 'Akilisi Pohiva's replacement, Pohiva Tu'i'onetoa, will pursue such matters with the same energies as his predecessor, or how he will confront many of Tonga's mounting challenges - a struggling economy that was ravaged by Cyclone Gita in 2018, high levels of debt, and a growing battle against drug traffickers - let alone navigate the waters between tradition and Tonga's nascent democracy.

Prime Minister Frank Bainimarama will continue to be a tireless campaigner for international action on climate change. At the recent COP25, as Fiji touted the Pacific Blue pact, aimed at reducing 40 percent emissions from domestic shipping fleets, Bainimarama announced his country was "taking steps to chart a different future for the oceans". On this path, Fiji is putting climate action and ocean conservation front and centre of its energies. His government says that at least 30 percent of Fiji's EEZ will be declared protected areas by 2030.

On the home front however, the outlook for Bainimarama's leadership and his ruling Fiji First Party is less clear. The former military strongman has been running the country for almost a decade and a half. This year is Bainimarama's sixth as an elected leader, but he is still not entirely comfortable with the concept of a parliament where others may disagree with his views and engage in debate. The prime minister's unfortunate physical exchange with opposition MP Pio Tikoduadua outside parliament last August was an example of this. As to who the prime minister may square off against this year, the drawcard is yet to be announced. Meanwhile, the main opposition party, SODELPA, is steadily preparing for the 2022 election, hoping it can build on 2018's result when Bainimarama only won narrowly. SODELPA's commitment to protecting the foundations of indigenous Fijian culture remains its core policy guide, something that leaves it prone to attacks by Fiji First, which claims to be the government for all ethnicities.

So far, Australia's Pacific "step-up" has been more of a drunken stumble. The region's largest country and biggest donor managed to get offside with nearly every Pacific Island country last year - with meetings that descended into shouting matches, a deputy prime minister who said Pacific people could 'pick fruit,' and being called out as the "black sheep" of the Pacific in front of the world's media.

For Canberra, 2020 will be about trying to cut down on the blunders while trying to consolidate the precarious position of describing itself as vuvale (Fijian for family) while continuing to be the world's largest coal exporter and inveterate climate action laggard. Sure, the Pacific step-up has seen an increase in aid and infrastructure spending, a massive loan to Papua New Guinea, revitalised labour schemes, new patrol boats, and a development initiative. But for many Pacific governments that means little when the government struggles to acknowledge - or at the very least to support - the countries in their fight against climate change. That reared at both the Pacific Islands Forum - with both Frank Bainimarama and Enele Sopoaga accusing Morrison of displaying a neo-colonial attitude and alienating Pacific leaders - and in Spain for COP 25 when the Marshall Islands called out Australia as one of the countries trying to derail strengthened commitments to reduce emissions. Fiji's Attorney-General, Aiyaz Sayed-Khaiyum, said, "you have some black sheep members in the family, and of course, you can have differences but we hope we can get some rationality with the Australian thought process". He's not the only one.

Compared with step-up, New Zealand's Pacific "reset" is going swimmingly, but that's a low bar to clear. The new decade started with a somewhat bizarre caricature of a Polynesianfied Jacinda Ardern on the cover of Islands Business, named its 'Pacific person of the year'. Aside from Guam's Lou Leon Guerrero, Ardern is the only female head of government in the region. Her government has increased its presence and aid to the region, and launched a number of schemes, but without the financial heft of any of the other powers, the reset is relying heavily on relationships. The government has passed a zero carbon act and a number of other policies on climate change, but Pacific leaders have been clear that while the right things are being said, a 'wait and see' approach is being taken. If the action doesn't meet the rhetoric, then it won't be long until New Zealand's back to being lumped in with Australia in the eyes of the Pacific's leaders. With 2020 being an election year in New Zealand, there may yet be more regional re-setting to come if the government changes. The main opposition National Party has been highly critical of the changes to the aid programme under the reset, as well as the extra funding of the foreign ministry.