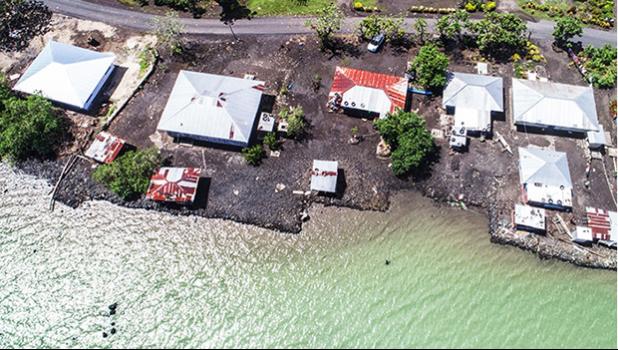 Apia, SAMOA — Villagers on the west coast of Upolu are living in fear over an “out of the blue” natural phenomenon, where a rapid rise in the sea level led to water reaching their doorsteps.

The villagers of Afega and Lotoso’a Saleimoa shared their concerns about the rapid rise in the sea level, which they said triggered panic amongst the families.

“It was new to see the sea water come up that high,” Gauifaleai Patu of Lotoso’a Saleimoa said yesterday, in an interview with the Samoa Observer.

“This is the first time I have seen the tide this high, and you could even paddle your canoe, where the grass is on Wednesday. Compared to previous years and even during Cyclone Evan (in 2012), the sea water level was nothing compared to what we saw earlier this week.”

The mother recalled that they noticed the changes in the sea level on Tuesday and “it got really bad on Wednesday”, which she said made it difficult for their family car to be parked in front of the house.

Small pools of water seen in front of the family home, when this newspaper visited the village yesterday, is the only evidence left of the natural phenomenon.

Ms. Patu said she had already sought help from the Ministry of Environment and Natural Resource (M.N.R.E) to build a seawall, which is currently underway in the area behind her family house.

The mother was told she had to write an official letter to the Ministry with her request.

Three villages down the road is Afega, another community that was badly affected by the natural phenomenon this week.

“It was unlike anything I had seen at our area since I have lived here,” said Peo Sione Fa’alelea of Afega.

The father of four said the rapid rise in the sea level occurred on Wednesday evening at around 7.00pm and it reoccurred yesterday morning.

“As you can see from the debris from the sea water, it came past our house to the front door, all the way to the other side of the road,” Peo said, pointing to the road that is about 8 meters away from his door steps.

“If you also look at our outdoor kitchen, it has already claimed it and is rapidly swallowing up the rocks to the back of our house. What happened on Wednesday and this morning was unbelievable and its hard to explain it, unless you have seen it yourself.”

Since the event on Wednesday, sea water has reached the back of the houses of the family together with their neighbours.

“Last night (Wednesday) the waves were crushing on the cement of the house. We took our children with my wife and waited on the other side of the village…we panicked and we were unsure of what was happening – if it was a tsunami or not. It wasn’t until the sea water lowered later on last night that we felt it was safe to come back home.”

According to Peo, if there is something that can be done to assist them, it would be a seawall to defend them and their properties.

“There is no seawall to defend us from the rising sea level, and if something does happen at night, our children and elderly are the most vulnerable ones,” he said.

“Our plight and I know all of us living on this area are in need of the Government’s help to provide that seawall for our safety. I am afraid for my children, and I am afraid that when we are not at home with them, something might hit us and we will be too late to help them. So what we do now is we take the children to our relatives inland if we are not at home, just incase something happens. It is a lot of moving around but my children’s safety is my priority.”