Bluesky Samoa launches 4G+, is Am Samoa next? 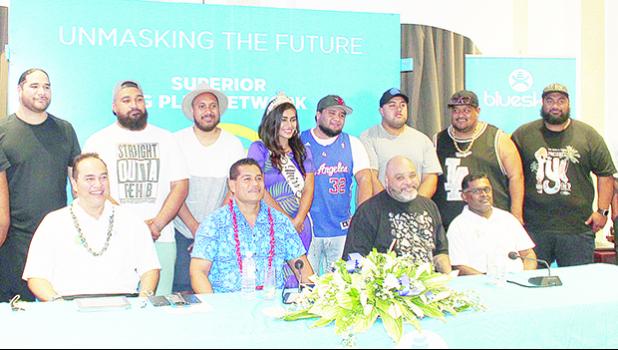 CEO says they have conducted internal test and the results are — “mind blowing”
By
Joyetter Feagaimaali’i-Luamanu
joyetter@samoanews.com

Apia, SAMOA — Unmasking the future of Samoa, as BlueSky Samoa launches its 4G+ or LTE advances a technology that’s been in the making for the last three years, says Bluesky Chief Executive Officer, Toleafoa Douglas Creevey at the official launching Tuesday evening (Samoa Time) at the Sheraton Hotel Ballroom.

He said this is the biggest milestone and investment in Bluesky history since 2011.

“In an ideal scenario our network could deliver more than 100mbps download and 40mbps upload, these depend on many factors such as spectrum availability, handsets and the customer’s users. We have conducted an internal test and the test results, it’s mind blowing. What is 4G+? It’s another name given to the 4th generation of mobile networks.”

Toleafoa during his speech said, this is the new term for the enhancement of the 4G network and will allow old 4G ones to receive data from multiple bands and also operate on two bands, 1800MHz and 700MHz for superior connection. He said the target is to achieve peak data rates of 1billion of bits per second.

Regarding coverage, Toleafoa said they will be able to cater up to more than 50% of Samoa’s population with 4G coverage — with 4G+ coverage and their coverage will span from town to Alafua; town to Vaoala; town to Vailele, Vaitele, all the way to the Magali’i airport and to the Faleolo Airport.

“The 4G+ technology allows you to take advantage of a superior Internet experience, quicker uploads and downloads, minimal buffering, improved web browsing, better video viewing, more gaming, apps and data. All you need to do to enjoy this great network is a 4G capable handset, be in a 4G coverage area and enjoy the best 4G plan,” he said.

“In so many ways Bluesky has demonstrated their commitment to Samoa and its people. Year on year investments on their mobile network, improving the fiber network in Apia and introduction of Moana Cable TV are a few that are significant technology advancements. Furthermore the dividend payments to (Unit Trust of Samoa) UTOS the local share holder are an indication of Bluesky’s commitment to giving back to the community.”

The Minister further stated that aside from that, Bluesky is involved with the community by supporting Manu Samoa, Miss Samoa pageant, Samoa Cancer Society and Samoa Victims Support Group.

Afamasaga stated that the launching of the 4G+ comes at a no better time than now “as we the government is making every effort to make Samoa the hub of the Pacific,” and pointed to its commitment to the Samoa people, on the Tui Cable project and the Pacific cable project — saying they are all indicators of Samoa’s goals to bridge the digital divide.

“We have only a few affluent members of our community that enjoy the benefit of having internet, this is solely because of the operators needing to pay a large sum to satellite operators to bring this service to Samoa. With Internet penetration as low as 7% in households in 2011 — this is very low, when you compare it to the Pacific island neighbors.

“With government’s plans to connect Samoa, these services would be affordable to many. Therefore the launch of the 4G+ by Bluesky is extremely relevant and timely. I am told that with this launch Bluesky will also offer 100% 3G coverage in all its coverage areas,” he said.

He further stated the Samoa government has made major strides to invite investors to Samoa and they are glad that Bluesky has taken a lead role in displaying their confidence.

As of Wednesday (Samoa time), Bluesky will host a video mapping and light show for the first time in Samoa in front of the government building for two nights and on Friday evening (Samoa Time) — their main show — is where they will host a free concert for all and performing that evening is Fiji, Lapi Mariner, Kiwini, Ben Vai, Drw Deezy, Laga Savea and Brownhill.

Toleafoa in response to Samoa News questions during the press conference asking when they will launch this service in American Samoa said, “To stay tuned.”

However Samoa News understands that Bluesky will launch the 4G+ within two weeks in the territory.