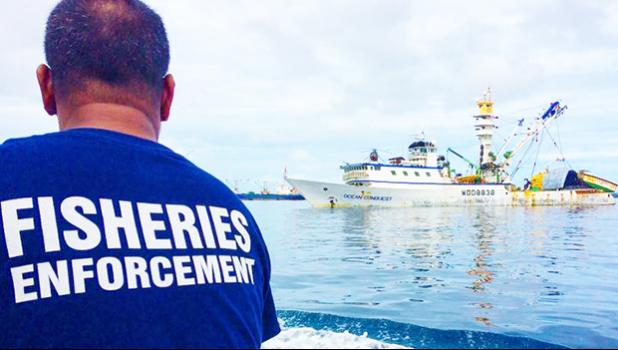 Majuro, MARSHALL ISLANDS — Every year, a potential showdown looms between Pacific island countries and distant water fishing nations at the annual meeting of the Western and Central Pacific Fisheries Commission (WCPFC) that happens early next month - over one issue or another.

This year is no different. A "tropical tuna conservation measure" that has been in place for several years expires December 31.

Getting agreement between the nearly 20 Pacific Island members of the WCPFC and the distant water fishing nation members that include the European Union, the United States, and China, Japan, Taiwan and other Asian nations, is challenging even on what appear to be relatively easy issues addressed by the Commission, which governs fishing on the high seas in this vast part of the Pacific. The tropical tuna measure, meanwhile, is a complex conservation policy governing fishing for the different tuna species in the region.

Adding pressure to the usual challenge of finding a path to agreement at the annual WCPFC meeting is a warning from the Marine Stewardship Council (MSC) that it may revoke certification that tuna from the region is sustainably caught.

The MSC stamp of approval is considered an important marketing tool for tuna products, which tells consumers tuna products with the MSC "check mark" are sustainably caught.

If the WCPFC "fails to make significant progress this year and next in establishing robust management measures for implementation at its December 2022 meeting, then many MSC-certified tuna fisheries could face difficulty meeting their conditions and certifiers might suspend them in June 2023," said MSC in a recent warning to the WCPFC.

At issue is the lack of "effective harvest strategies and harvest control rules," said the MSC in a statement.

Marshall Islands Marine Resources Authority Director Glen Joseph said harvest control rules have been under development by members of the WCPFC for the past several years, but have not yet been approved.

Although the WCPFC's expiring tropical tuna measure does not include harvest control rules, it establishes a broad framework for ensuring sustainable fishing of tuna, said Joseph.

He called it a "flagship" measure that has been in place since 2018 and "has worked for us."

The Marshall Islands position on the tropical tuna measure is to maintain the status quo with some tweaks "only to improve, not erode it," he said.

However, there is pressure from some distant water fishing nation members of the WCPFC that since all tuna stocks in the western Pacific are rated by scientists as healthy, it's time to change the measure to open up more fishing opportunities, he said.

Still, both Joseph and Dr Sangaa Clark, the CEO of the Parties to the Nauru Agreement (PNA), say that no matter what happens at the WCPFC's annual meeting in three weeks time, tuna fishing within the zones of the nine participating PNA islands is regulated and fished at sustainable levels.

The MSC also certifies the PNA's free school skipjack and yellowfin purse seine fisheries, which has been a helpful factor in marketing tuna caught in PNA zones. This MSC certification expires in 2023.

The western and central Pacific is the only area in the world where all tuna stocks are healthy and being fished sustainably due to management by island nations where the majority of tuna is caught, said Clark.

Most of the tuna in the western and central Pacific is caught in PNA waters.

"The sustainability of the resource is the result of good governance and the innovative Vessel Day Scheme regime under which effort is managed to maintain PNA nations' sustainability goals for their future," said Clark, who is based at the PNA Office in Majuro.

Clark said a lot of work has already gone into drafting harvest control rules. "The adoption of harvest strategies and control rules are designed to protect stocks by having pre-agreed decision rules in place for responses to declines in stocks," she said, noting that the work involved "is technically complex and has been set back by Covid-19." It involves 35 fisheries that are MSC certified, or under assessment, in WCPFC waters covering purse seine, longline, pole and line, and handline fisheries.

But the PNA CEO made the point that the primary hurdle to completing these harvest control rules isn't their technical nature or due to Covid-19.

"The main reason for the delay in meeting the (MSC) requirement is that some distant water fishing nations have sought to exploit the need for progress in this work to advance their commercial interests at the expense of resource-owning Pacific Island countries," she said.

"The PNA Office continues to look for ways to advance work to meet the MSC requirements so that customers, industry participants and resource-owning countries can continue to benefit from the MSC certifications," Clark said.

"It would be unfortunate, and may result in some confusion in the market places for tuna products, if the MSC certification for the region is lost," Clark said.

"But consumers can be assured that nothing has changed within the PNA fishery. Its governance and chain of custody and validation remain intact. Catch from PNA waters comes from the most sustainable tropical tuna fishery globally."

Despite the lack of approved harvest control rules, Joseph said he has seen a great deal of progress as a result of WCPFC action over the past 10 years. "The data wouldn't be where it is today without the WCPFC," he said, adding that there are still gaps and uncertainty about fish stocks and level of fishing effort as a result. "It's the obligation of WCPFC members to provide (tuna catch) data," Joseph said. "You'd think after 20 years, we'd have it right. But data is still an issue."

The importance of completing harvest control rules is to "draw a line that we don't go beyond for fishing," he said.

The MSC has put the WCPFC on notice that certification of two dozen fisheries in the western Pacific region are on the line.

"If the WCPFC does not act in time, then all 22 certified tuna fisheries in the region, as well as the additional five currently seeking MSC certification, are at high risk of suspension from the program by their independent assessors in June 2023," it said.

The MSC warning is another reason for maintaining the tropical tuna measure and advancing harvest control rules for approval and implementation to ensure long-term sustainability of tuna stocks, Joseph said, adding that the island members of the WCPFC work as one unit on these sustainability issues. "What we commit to now (at the December annual meeting) is important," Joseph said.