Connecting with their Samoan identity 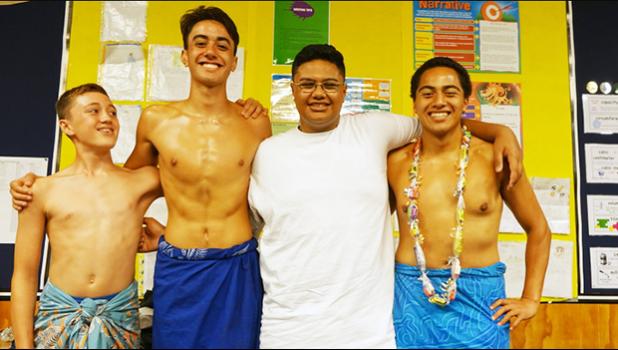 Samoan students at an Auckland boys school who do not speak the language are using Polyfest to reconnect with their culture.

This year the group enlisted help from College old boys and their mothers and, although their sights are set on placing in the top three, it was not their main motivation.

Year 13 student Eddie Tongalahi does not speak Samoan but said the practices have allowed everyone to learn more about their culture.

"Some of the boys are not able to understand or speak Samoan, which, I guess, is kind of like an art that's been lost through our youth of our generation these days," he said.

"So with Samoan group it's kind of like a way for us boys to reconnect with our culture."

Fellow member and year 13 student William Morrison said for his final Polyfest he decided to join the Samoan group and dedicate his performance to his mother.

"I just want to make my family proud because that's what I do this for.

"When I'm at practice struggling I think of my mum. I think about how hard she's worked for me and so I just want to do this for her and show her I care."

Year 12 student Caerwyn Tomuli Liuliu-Afoa said for their group the competition was not all about winning.

"If we lose on the day, then we lose. But the more important aspect ... is having a bond with each other and also understanding who we are."

Sixty boys with oiled chests and blue lavalavas performed a short Polyfest set for a fiafia night at St Peter's on Monday.

Māori and Pacific people are a minority in the affluent inner-city suburb of Newmarket, where the school is nestled.

As well as studying law and commerce at Auckland university, he was now helping mentor this year's leaders.

Polyfest was the only event on the calendar where Pacific students could express who they were, he said.

"It was really crucial, especially during [NCEA] Level 3, when I was facing the stresses of school work, sport, and other duties around the school," Mr Lava said.

"My Samoan group was just where I could express myself. It took up so much of our time but it wasn't pointless - it was for a really good reason.

"And it really helped us come to terms with making sure that we stay attached to our roots at a predominantly white school."

The group has been practising for five weeks, initially rehearsing for 10 hours a week.

That ramped up to 14 hours a week for the last three weeks, along with a 'live-in' last weekend where the group stayed at a church overnight for a final push before competition week.

Polyfest was on at the Manukau Sports Bowl through Saturday.