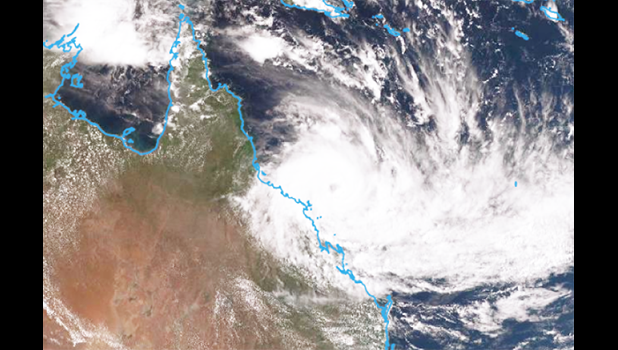 Tropical Cyclone Debbie has intensified to category four and is expected to hit the north Queensland coast on Tuesday morning, the Bureau of Meteorology (BOM) has warned.

At 2:00am, the Bureau predicted Cyclone Debbie would make landfall as a category four tropical cyclone between Ayr and Cape Hillsborough, north of Mackay, about midday AEST.

Destructive winds of more than 125 kilometres per hour were already occurring about the Whitsunday Islands, and thousands were without power in Cannonvale, Airlie Beach and parts of Mackay.

"At this stage we can't rule out a category five system during the coming hours," he said.

Premier Annastacia Palaszczuk said it was "going to be a tough night".

"My priority is for Queenslanders to be safe, right up and down the coastal communities that are in the zone," she said.

"Please now reassure your children, go to the safest place in your house — the most secure.

"We are in the stage now where some communities are already in lockdown, so they should not move.

"I want to reassure you that in the daybreak once the storm has passed, we have emergency response personnel there ready to assist you and your families."

Ms Palaszczuk said the BOM had advised it could take up to 18 hours for the cyclone's core to pass.

"This is a destructive cyclone," she said.

"Please do not go outside, don't risk it, please don't risk your life or risk the life of a loved one — stay indoors."

"People in the path of the core of the cyclone can expect many, many hours of sheltering," he said.

"Remember that the lull in the winds may be the eye of the cyclone and the destructive winds will return from the opposite direction, so be very careful about going outside."

More than 25,000 people were advised to move from low-lying areas in Mackay by midnight, with fears incoming Cyclone Debbie could cause inundation of up to 2.5 metres above the high tide level.

The BOM has warned the storm will be the worst since Cyclone Yasi in 2011, and Ms Palaszczuk said it was "bigger than Marcia" — the category five system that hit Queensland in 2015.

"The range of inundation may be as much as 0.8 metres above highest astronomical tide [HAT] or worst case scenario 2.5 metres above HAT," Commissioner Stewart said.

"We're asking people who can move out of those low-lying areas to move now.