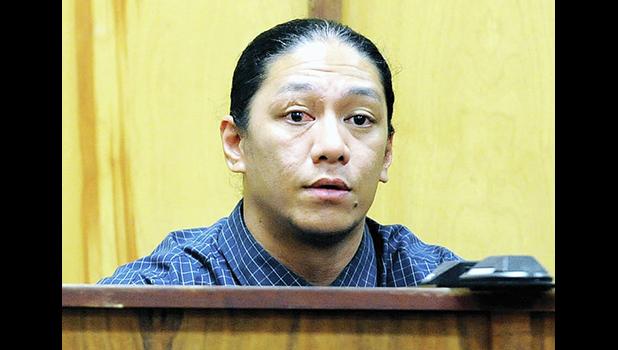 Kealakekua, HAWAII — One of three people charged in the attempted murder of a hotel security guard took the stand Wednesday during the third day of trial, telling jurors he was inebriated and never intended to kill the man during the Sept. 17 incident.

Lama Lauvao, who along with Wesley Samoa and Natisha Tautalatasi, is on trial for attempted second-degree murder in connection with the beating at the Kona Seaside Hotel that critically injured security guard, John Kanui, testified in his own defense.

“I wasn’t in the right when I kicked him. Kanui grabbed my wife and I hit him. I kicked him again. I made very poor decisions,” Lauvao testified during questioning by his attorney, Andrew Kennedy. “I was not trying to kill him, I was very angry and was drinking all day.”

“I’ve seen what condition he is in now and am definitely not happy with what happened,” Lauvao continued. “I pray for this man and his family. I want to find peace between myself and his family, I am a man of faith.”

Lauvao recounted the defendants’ activities leading up to the incident at the hotel that night, telling the court he, Tautalatasi, Samoa and Mahealani Kanehailua spent the afternoon at a family barbecue at Old Kona Airport Park before taking the party to Samoa’s parent’s home until about 10:30 p.m. At that point, he testified, they left for Sam’s Hideaway.

After deciding they’d had enough alcohol for the day, Lauvao said they left the bar about 11:45 p.m.

As the surveillance video was played again for the court, Lauvao explained what happened after they arrived at the hotel.

He testified that he was trying to get between his fiancee, Tautalatasi, and Kanui to defuse a verbal confrontation between the two.