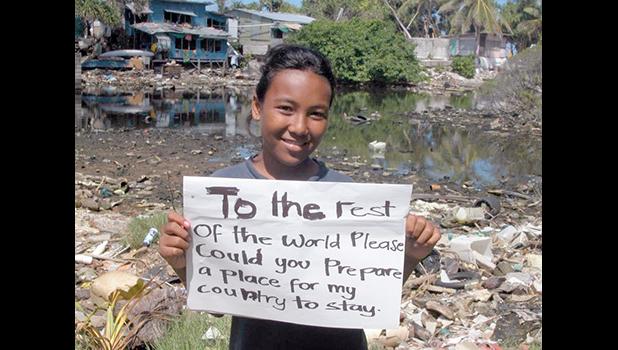 Tokyo, JAPAN — As the Rugby World Cup prepares to kick off in Japan today - the same day a global strike for the climate takes place - a new report has highlighted how three of the smallest countries taking part, Fiji, Tonga and Samoa, are under threat because of the aggressive fossil fuel burning of some of the richest countries, including Australia, the USA, hosts Japan and European nations.

This climate injustice mirrors that within world rugby where these same countries poach the best players from Pacific Islands and yet omit those countries from decision making and have even proposed excluding Fiji, Tonga and Samoa from future major tournaments. Whether it's current players like England's Manu Tuilagi and Wales' Talupe Faletau or greats from the past like New Zealand's Jonah Lomu, Australia's Lote Tuqiri, Samoa's Pat Lam and Fiji's Waisale Serevi, Polynesian players have enriched rugby nations around the world.

The report, World in Disunion, by development charity Christian Aid, shows how the Pacific Islands face a climate onslaught as the world heats up, while richer rugby nations block progress to tackle climate change. One study suggested that up to 1.7 million people could be forced to move from their homes in the region as a result of climate change in 2050. There will be only eight more Rugby World Cups by that date: fewer than the nine that have already been played.

Former Samoan international flanker Jonny Fa'amatuainu, who had a five-year spell at Bath as well as stints with clubs in Wales and Japan, said: "Our planet faces a climate emergency. July 2019 was the hottest month on record, ever. 2019 is on track to be the hottest year on record, ever. Climate impacts are everywhere we look, from accelerating ice melt in Greenland, increasingly savage hurricanes in the Atlantic and severe droughts in Australia.

"As a Pacific Island rugby player, tackling the climate crisis is close to my heart. My grandparents and other families who lived in a village on the coast in Samoa moved inland two years ago because of climate change.

"The Pacific Islands are the soul of our sport, and we have produced some of the most dynamic and exciting players on the planet. Yet as this report underlines, Samoa, Tonga and Fiji are all facing increased risks from rising sea levels and extreme weather."

The report also shows that the Pacific Islands are bearing the brunt of climate change but have done the least to cause it, while other World Cup nations are some of the most polluting on the planet.

Fiji produces just 1.6 tonnes of carbon dioxide per person, Tonga 1.3 and Samoa 0.7 while Australia produces 16.5, the USA 15.7, Russia 12.3, Japan 10.4 and Ireland 8.2 tonnes. This means the average Australian produces 24 times as much CO2 as a Samoan. The World Cup kicks off on September 20th between two of the worst offenders, Japan and Russia.