FAST to ask Samoa judges to recognize impromptu swearing in 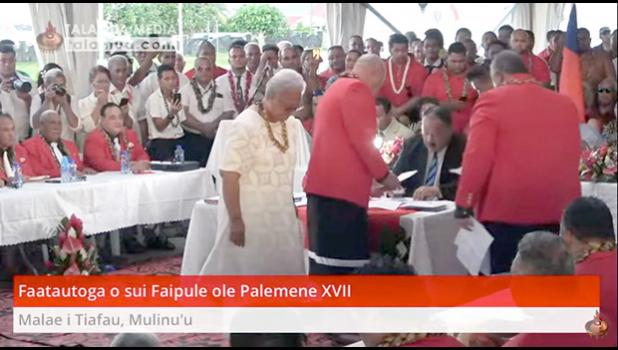 Apia, SAMOA — The FAST Party in Samoa has filed an application with the Supreme Court in Samoa to have it recognize an impromptu swearing-in ceremony of elected members of the new political party.

At the beginning of last week the Court ruled the ceremony illegal as the Head of State wasn't present.

But it said parliament must sit by this Monday or it could reconsider the previous swearing in conducted in a tent in parliament grounds after newly elected members were locked out of Parliament.

At the time the Fast Party leader Fiame Naomi Mata'afa described the open air ceremony as a legal option, applying the principle of necessity, because all other avenues were blocked.

On Sunday night the Head of State went on television to go against the Court ruling and push the convening of parliament out by another month.

On Monday the rival HRPP wrote to police to lay a complaint over the impromptu swearing in, saying they wanted it investigated as a potentially criminal event.

The police commander, Fuiavailili Egon Keil, has set up an investigating committee.

The complaint allegedly follows recent decisions by the Supreme Court where some acts of gift giving have been allowed as being culturally accepted.

The Samoa Observer reports the complaint was made in a letter from HRPP Secretary Lealailepule Rimoni Aiafi to the Judicial Services Commission.

It said the Chief Justice appears to be incompetent in the handling of HRPP cases since the beginning of electoral petitions.

The letter adds that his rulings do not appear to be in accordance with the law, basic legal principles and well established precedent.

It said Satiu is unlikely to be familiar with the express exclusion of fa'asamoa and giving money during the elections to voters.