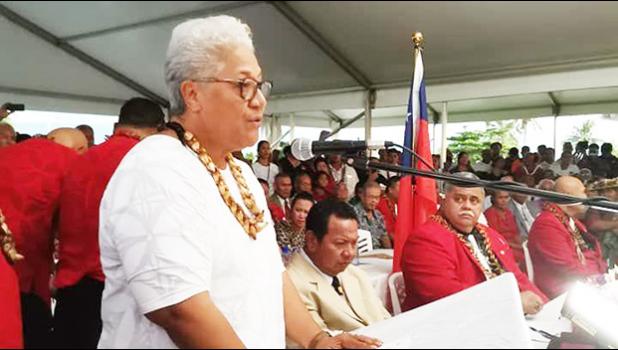 Apia, SAMOA — Samoa's incoming prime minister has called for the caretaker HRPP government to relinquish power so the country can rebuild.

The country is in a constitutional crisis after the FAST party, which won a majority in April's election, was blocked from entering parliament to form a government on Monday.

The Head of State had canceled a scheduled sitting on Saturday, but that was overruled by the Supreme Court on Sunday.

FAST's members arrived on Monday to find parliament locked, with the clerk and speaker saying they were acting on orders from the caretaker minister for parliament, HRPP leader Tuilaepa Sailele Malielegaoi.

Under the constitution, parliament must sit within 45 days of an election, and Monday was the last possible day for that provision to be met.

FAST instead held its own swearing-in ceremony in a tent outside parliament, where its leader Fiame Naomi Mata'afa was sworn in as the prime minister, but the head of state, the judiciary and parliamentary officials were all absent.

The attorney general — an HRPP appointee — has said the ceremony was unconstitutional, and that FAST is not the government. A Supreme Court challenge will be heard on Thursday (today in Samoa).

Fiame, in an address to the nation on Wednesday, said FAST was forced into an action to get past "the enormous assault on the dignity of this country and its people" by the HRPP. While not mentioning him by name, she called on Tuilaepa to stand aside.

"The rule of law ... was the foundation for Monday's swearing in ceremony as all of us were acting in accordance with the constitution, the declarations of the Supreme Court, and simply what is right," she said.

"The lawbreaking caretaker and his weak and complicit officials have undermined the dignity of this land and all of its people," she said. "That shame and that stain will be upon their hands forever."

Fiame called for Tuilaepa to stand down so her government could rebuild the country from the crisis.

"When the arrogant refusal to concede power, a power which is given by the people, becomes a grubby international incident, then our caretaker has dragged us all to his lowest ebb, and he and all his sycophants must go."

Fiame said she was prepared to wait through more taxing times, and asked supporters to keep their faith as they pursued an end to the crisis.

However, in an interview broadcast minutes after Fiame's speech, Tuilaepa maintained he would not stand aside, reiterating his calls for a second election.

Speaking to TV3, Tuilaepa insisted his party had not lost the election, and that a second poll would be the only way to settle the crisis.

The Head of State's decision to call a second election, on Tuilaepa's recommendation, was overruled by the Supreme Court two weeks ago, opening the way for FAST to claim majority government.

But Tuilaepa said the courtroom was no way to settle the result, and the people should decide.

"The judiciary's independence and impartiality is truly questionable," he said. "The election is now invalid with the 45 days and a government cannot be created because the time has lapsed."

If FAST won that second election, he said he would concede. If they refused to go to the polls, he would continue with his judicial appeals.

But in either case, he would not stand down immediately.

"Its not like we want to keep sitting here. It's almost 6:30 and I'm still sitting here, at the office of the prime minister, because there are important matters that I need to attend to.

"If I wasnt meant to be here, I'd be at home having evenings prayers with my family."

He also suggested settling outside the courts — saying it might be best to go outside of palagi legal practices, and that he had offered an olive branch to Fiame.