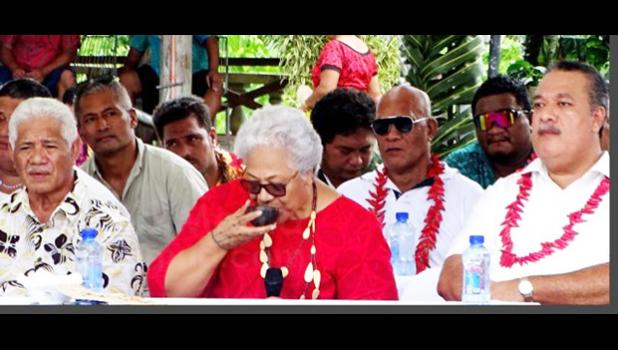 The caucus of Fa'atuatua i le Atua Samoa ua Tasi, or FAST, party was united in the decision to elect Fiame leader during a meeting on Tuesday.

Fiame is the daughter of the first Prime Minister, the late Mata'afa Fiame Faumuina Mulinu'u II.

She is the second woman to take the leadership of a political party after one of her aunts, former MP and founding member of the HRPP party, Matatumua Maimoana Vermullen, founded and led the Samoa All People's party in the 80s.

Fiame said she was excited by the challenge of leading a new party.

"Because it's new, people are doing things in new ways. We are wanting to achieve new results or better results so yes I am feeling very excited. I feel very honoured.

Fiame said in the normal Fa'a Samoa way, there was a lot of respect involved in the announcement.

"I also said to them you have laid a burden on me but I can take the burden, knowing that this party is a party that will work together as a team.

"That is my kind of leadership and I would like to start off that way."

She said, as a foundation, she would aim for clarity on the things that bring people together.

"The rule of law, good governance, equal participation of people in the economy. All those kinds of things are better services."

When asked about the practices of the governing Human Rights Protection Party, and why she left, Fiame said the HRPP had been "there too long".

Fiame said after years of being a member of the HRPP there were a few new things she had learnt now she was with FAST.

"It's not that the issues are new but just how people are seeing it or how they are wanting to resolve it. Which is a good start."

Fiame and three colleagues, including Laauli, are facing a Commission of Inquiry after Prime Minister, Tuila'epa Sa'ilele Malielegaoi accused them of treason and breaching parliamentary rules.

Tuila'epa told parliament the inquiry was to investigate abuse of the dignity and respect of parliament.

The MPs had been absent from parliament, campaigning, and understood they had the approval of the Speaker for their absence.

Earlier this week Fiame became the FAST party's first MP to be elected unopposed in her Lotofaga constituency.

Fiame had been a long-time member of the ruling HRPP but left the government last year due to her opposition to three bills changing the Constitution and empowering the administration of the Lands and Titles court.