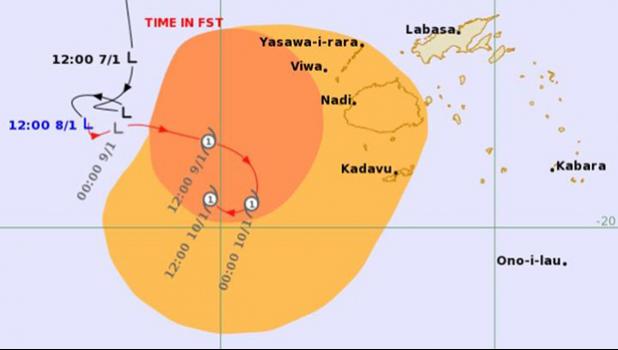 Nadi, FIJI — The Tropical Disturbance TD03F was expected to become a low by midnight Saturday and attain a category 1 cyclone status by midday Sunday (local time).

In a threat map issued by the Nadi weather office, the category one cyclone will have an effect on the whole of Fiji's main island Viti Levu.

Fiji Met Service manager Stephen Meke said residents living on the western half of Viti Levu, Yasawa and Mamanuca group could expect strong northwest to northeasterly winds of up to 55km/hr.

"Tropical Disturbance 03F has intensified to a depression stage which simply means it is very close to tropical cyclone stage.

"So for now we are looking at TD03F to possibly become a tropical cyclone in the next 24 hours."

For the rest of Fiji, Meke said there would be moderate to fresh northerly to easterly winds, becoming predominantly northerly from Sunday.

Tropical Disturbance 03F has intensified into a depression at midday on Saturday and its center was located about 470km west-southwest of Viwa and 515km west of Nadi.

The depression is currently slow moving, Meke said adding it was likely to intensify further into a category one tropical cyclone by Sunday.

"TD03F is expected to move towards the east-southeast at about 10km per hour and the centre should pass about 260km west-southwest of Viwa at midday Sunday.

"Sea conditions will be extremely dangerous for sea travel especially for small crafts and not suitable for coastal activities."

Fiji has been experiencing heavy rain since Thursday with flash-floods expected in low-lying areas.

The Nadi weather office was earlier this week monitoring a low-pressure system which was set to develop into a tropical cyclone between Vanuatu and Fiji.

A series of alerts and warnings linked to active low-pressure systems were expected to affect both countries this week.

The Fiji Met Service is urging residents to prepare for possible flash flooding, lightning strikes, landslides, and reduced visibility on roads and at sea.

Strong wind warning were in place for the Lau Group and a heavy rain alert was in force for Vanua Levu, Taveuni, Lomaiviti and nearby smaller islands.

The Pacific cyclone season is from November to April.