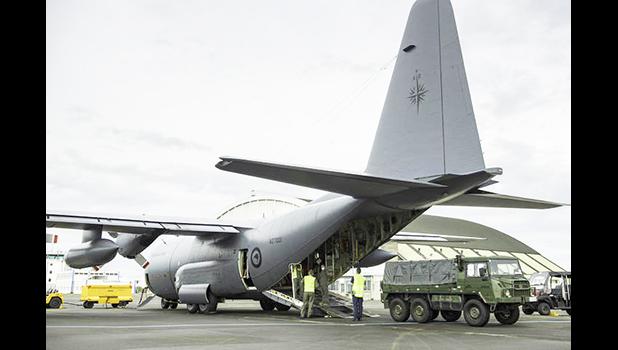 Wellington, NEW ZEALAND — The first international relief flight to Tonga since last week's volcanic eruption is due to arrive in the kingdom.

The ash covered runway in Tonga was cleared by hand yesterday but the situation is fluid and could still change.

Emergency supplies onboard the aircraft include food and water, generators, hygiene kits and collapsible water containers.

Telecommunication outages in the Kingdom continue to cause grief for the Tongan diaspora with many still unable to reach their loved ones back home.

Tonga rugby coach Toutai Kefu told RNZ Pacific not knowing if his family and friends were okay is distressing.

"Just not knowing was really really scary. Honestly we just kept praying and had our fingers crossed that everyone would pull through safe," Toutai Kefu said.

Kefu said while he had not been able to contact anyone on the ground he is elated for those who have.

"I was just speaking to a friend in NZ who spoke to his mum and dad early this morning, he told me people on Digicel phones can get through but if they are on other networks they are unable to get through," Toutai Kefu said.

A Tongan student at the University of the South Pacific said she also fears for her family's safety after losing communication with them just moments after the volcanic eruption last weekend.

Tupou Vauatau Mafi said she was on the telephone with her family in Tofoa Tongatapu, when the Hunga-Tonga Hunga-Ha'apai volcano erupted.

The 27-year-old said her younger brother and sister were terrified. She has not heard from her family since.

"We are very aware of the true danger that is lurking behind all this good news, but we chose to be hopeful and to hold on to the good news that comes," Tupou Vauatau Mafin said.

There are 200 Tongan students at the USP campus in Suva.

Mobile phone company Digicel has confirmed re-establishing communications between Tonga and the rest of the world.

But links are still limited with the largest mobile company, UCALL, still down.

Digicel lines have been clogged with heavy traffic, leaving many still unable to get through to loved ones.

Meanwhile, a cable repair ship, the Reliance, is scheduled to leave Papua New Guinea for Samoa tomorrow enroute to Tonga.

The Kingdom's undersea high-speed internet cable was damaged during the volcanic eruptions cutting off internet access.

Tonga Cable Ltd Chair Samiuela Fonua said the company is satisfied with the progress so far of getting the repair vessel onsite.

"We have got the plan of work now for the cable vessel. They are preparing now and they are planning to leave Papua New Guinea on the 21st. It will take about eight to nine days and they will probably reach Samoa on the 30th," Samiuela Fonua said.

Fonua said the vessel will wait in Samoa for clearance from the Tonga government before entering the kingdom.

MORE HELP ON THE WAY FOR TONGA

More overseas aid is being directed towards Tonga as the country struggles to find its feet after the weekend's volcanic eruption.

The United States aid agency, USAID, is providing immediate funds of $US100,000.

In the sporting community, the Vodafone Warriors are also preparing a relief package for Tonga in the wake of the devastating eruption and tsunami on Saturday.

Warriors prop and Tonga International, Ben Murdoch-Masila, told RNZ Pacific the disaster was heartbreaking for everyone and he is grateful to the club for this initiative.

"It's just heartwarming to know that the club cares about their players and players families.So that puts everything at ease. But just for them to come out and show their support where they didn't need to, but they did. So it's pretty cool to be a part of a club like this," he said.

Ben Murdoch-Masila is one of six Tongan players on the Warriors roster.

The full details of the relief package are to be announced soon.