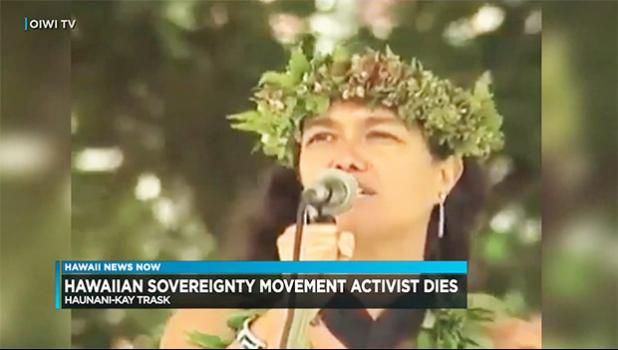 “Our teacher, colleague and friend, Haunani Kay Trask passed away this morning. Professor Trask was a fearless advocate for the Kanaka Maoli and was responsible for inspiring thousands of brilliant and talented Hawaiians to come to the University of Hawaii.”

Trask was most well-known in the community for her activism, especially for her work in promoting Native Hawaiian rights and indigenous sovereignty.

One of Trask’s former students, Healani Sonoda-Pale, heard the news from Trask’s family, who said she died “peacefully.”

“It is sad news for our Hawaiian community because she has been such an important voice,” Sonoda-Pale said.

“She helped to open the minds of hundreds, perhaps thousands of young Hawaiian scholars, and many of our allies. She’s helped to build those bridges with allies around the world for the plight of Hawaiians.”

Tenured as a professor for more than 30 years at the UH Manoa, Trask worked in co-founding the contemporary field of Hawaiian studies.

In addition to her career in activism and academia, Trask also wrote two poetry books — “Light in the Crevice Never Seen” and “Night is a Sharkskin Drum” — and a collection of politically provocative essays, “From a Native Daughter: Colonialism and Sovereignty in Hawaii.”

Many community members said they revered Trask as one of the most influential women in Hawaiian history.