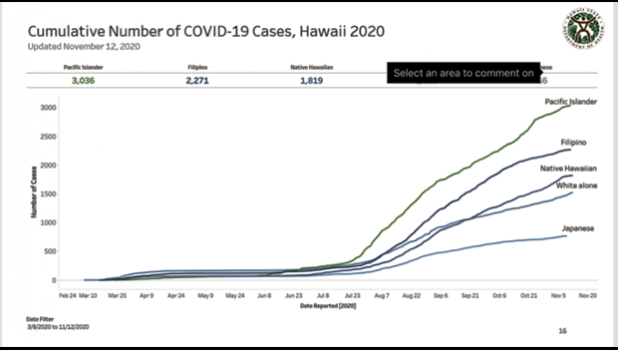 Source: Honolulu Civil Beat
Chuukese, Marshallese and Samoan residents have been getting the deadly virus at the highest rates.

Honolulu, HAWAII — Pacific Islanders, excluding Native Hawaiians, are more than twice as likely to be killed or hospitalized by the coronavirus in Hawaii than other racial and ethnic groups after adjusting for age and gender, according to newly released data from the state Health Department.

The agency presented data on how some racial groups in Hawaii are being unevenly impacted by the virus during a hearing with Hawaii’s advisory group to the U.S. Civil Rights Commission live-streamed Wednesday. This was the first of three planned hearings on Pacific Islanders and COVID-19 for a report the group plans to publish next summer.

Joshua Quint, an epidemiologist at the department, cautioned that there’s a lot of missing data about race as the state has a backlog of cases, particularly from August. But based on the data that is available, Quint said non-Hawaiian Pacific Islanders are at a five-fold risk of getting COVID-19 compared with Filipinos, who are the only other ethnic group in Hawaii contracting the virus at disproportionately high rates.

As of Nov. 12, Hawaii’s non-Hawaiian Pacific Islander community had more than 3,000 coronavirus cases, nearly twice as many as the state’s white community and four times as many as the Japanese community, both of which have much larger populations.

While as a whole Hawaii’s Pacific Islander communities are experiencing high coronavirus rates, some are more affected. The Chuukese community by far has had the most coronavirus infections, followed by Marshallese and Samoans.

Access to health insurance while unemployed varies widely amongst Pacific Islanders. Hawaii residents from Chuuk or the Marshall Islands haven’t been eligible for federal Medicaid since 1996, and Gov. David Ige cut their access to state-funded Medicaid in 2015.

Chamorros from Guam and the Northern Mariana Islands are U.S. citizens and are eligible for Medicaid and other federal programs. Samoans who are U.S. nationals have access to Medicaid as well, but Samoans from the country of Samoa have to live in the U.S. for several years before they can enroll.

Emily Roberson, chief of the disease investigation branch, said the department has been participating in meetings held by a grassroots Native Hawaiian Pacific Islander task force formed in response to the pandemic. In August, the agency formed a Pacific Islander priority investigations and outreach team to help with contact tracing, investigations and case monitoring. The state prioritized linguistic skills, cultural knowledge and community recommendations when choosing staff, she said.