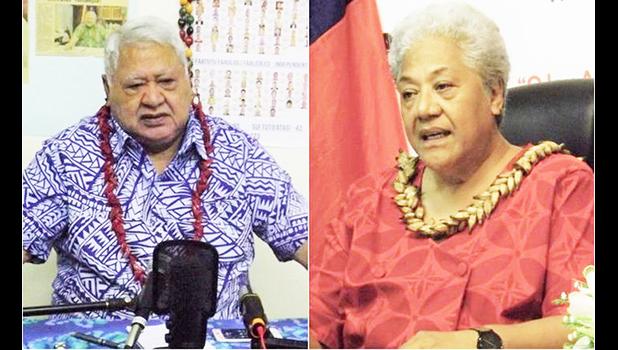 According to the Observer, F.A.S.T.'s deputy leader, Laauli Leautea Schmidt. confronted the Assistant Police Commissioner, Auapaau Logoitino, by asking his forces to uphold the rule of law.

Auapaau told Laauli that Police are not taking sides and they are only to offer security.

Supporters of F.A.S.T. crowded Mulinuu and have converged on Parliament House. But Police continue to surround it and the Mulinuu area.

Earlier in the day heavy Police surveillance converged on the Mulinuu area with dozens of members of the force stationed outside the Samoa Parliament House.

Several Police vehicles were stationed in Mulinuu as of 7 am, according to the Observer.

A member of Police on Good Morning Samoa program appealed to the public for peace and to work together for a safe country.

The senior officer said the Ministry is independent and will carry out their work according to the law.

However in Mulinuu police are fencing off Parliament with more than 50 officers conducting surveillance and in uniform.

Chairs that had been stationed outside parliament premise for the opening ceremony have been removed.

Doors to the Parliament remain closed and a few supporters of the Faatuatua ile Atua Samoa ua Tasi (FAST) party gathered near the courthouse.

Last night (Sunday in Samoa) FAST party leader, Fiame Naomi Mata’afa, called on the caretaker Prime Minister, Tuilaepa Sailele Malielegaoi and his Human Rights Protection Party to allow Parliament to convene and let the members form a government to run the affairs of the country.

Members of the media are on standby at Mulinuu.

The former Speaker of the Samoa House, Leaupepe Toleafoa Faafisi under the letterhead of his former office issued a public notice calling off Monday’s opening of Parliament despite orders from the Supreme Court to revoke the Head of State’s eleventh hour declaration to suspend the sitting.

The late Sunday statement was distributed by the caretaker Government's Press Secretary’s Office, and in it the former Speaker confirmed his decision to postpone the Parliament until a further proclamation has been made by the Head of State.

This latest notice from the former Speaker follows a special Sunday sitting of the Supreme Court that declared the proclamation by the Head of State, Tuimaleali’ifano Vaaletoa Sualauvi II on Saturday night to cancel Parliament’s oppening on Monday as "unlawful".

Chaired by Chief Justice, Satiu Simativa Perese the Court issued an interim order that any purported revocation of proclamation for Parliament to convene within 45 days is inconsistent with the judgment of the Supreme Court and the Constitution of Samoa.